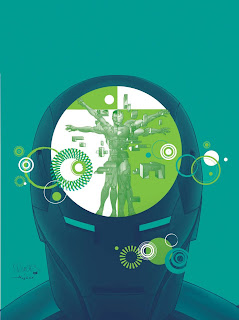 It’s hard to know where to start in a venture like this. We want to write short, punchy one page comic scripts about a different comic character a week. We know this isn't art, and so it's harder for people to sit down for longer than 3 seconds and appreciate, or even critique, our work. We know we're asking a lot of you but we've tried to streamline everything.

It is only a one page script. Have you ever read a script before? It's easy, half the page is lost in empty formatting. And it's not even a total issue, it's just on page. That's all we're asking of you. There are 9 of us and 7 days in the week, you won't be hit up too often, but we hope you will enjoy what we hit you up with. Then, there's the decision of the first character.

Do you go in for the obvious and add to the many Spider-Man, Wolverine, Batman comics on the stands? Do you go for the obviously not too obvious by joining in on the Deadpool bandwagon? Would one of the cool kids show off their indie chops by selecting Asterios Polyp, or even some Robert Crumb?

I chased my tail for a while trying to work out where this should all begin and then my mate boiled it down instantly and easily. Iron Man. Why? Because he’s just had a massive movie (and that can’t hurt with the site hits), and everyone should know who he is, and he’s a cool character and should be easy/interesting to write. I won't actually believe that anyone or anything is easy to write, but he's a more streamlined choice than kicking things off with someone like the 50's Captain America. Iron Man has now become a pretty iconic comic character and we want to write comic scripts so it seemed like a good fit. In fact, it was the perfect answer.

Tony Stark is charismatic, smart, good looking, and just a little bit kooky. Iron Man is sleek, dangerous, powerful, and completely awesome. Who wouldn’t want to write a page where these two fantastic characters are in fact the same character? So here we are now, all about to look at a stack of Iron Man one page scripts. We hope you enjoy.

In the future, I have plenty more characters I am eager to write, and eager to see others tackle. I have a list, it’s on my computer, and it’s very long. I’ll have time later to hit my favourite character, and then my favourite villains, and even my favourite indie/creator owned guys and gals. And I’m sure we’ll get to them all because I plan on being here a long while.

We hope you enjoy Iron Man and we wish to thank Stan Lee, Larry Lieber, Don Heck, and Jack Kirby because without them Iron Man would not be around.
Iron Man is a character owned by Marvel Entertainment.
Written by Ryan K Lindsay at 2:11 PM