Why The Blonde Phantom?

Honestly? Because she's my Golden Age gal, and one of the best characters in the history of comics. But YOU'VE never heard of her, so I'll throw in some actual information!

The Blonde Phantom is the result of Timely Comics (Marvel's predecessor, for those who don't know) moving away from their tales of super-heroics towards new and interesting things (In her case a movement to have some female-led comic books to appeal to young ladies. She was Louise Grant, a Detective's assistant by day, doing secretarial work for her boss, but by night she donned a domino mask and a kick-ass dress and fought crime! If that isn't the sort of concept YOU want to be involved with then clearly we need to start seeing other people!

After a fair while in that fine Golden Age spotlight she kinda just disappeared (along with a lot of Timely characters, but that's besides the point). She re-appeared in She-Hulk, but ignore all that. No, a great deal of the motivation for putting this character out there this week is in two recent releases. 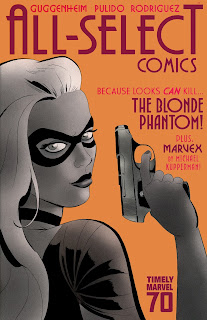 The first was her 70th anniversary one-shot in All-Select Comics, where we got a tale of a classic hero in a pulpish, noirish setting, showing her fighting skills and detective acumen years after her adventures had ended. It's this dark-yet-fun styling that made me think this was well-suited to our group, seeing as more than one of the people on here are fond of stories like Ed Brubaker's Criminal & Incognito, and moreso Daredevil. That sort of angle on the character would be a joy to behold ,and indeed hopefully will be a reality in the coming week.

The second was a one-off story in Marvel Adventures Super Heroes 14, an all-ages tale of her and Hawkeye doing their share of ass-kickery and detective investigation. I cited this as a specific highlight to our cadre simply because it captures the essence of EVERYTHING positive in the character. Hopefully that recommendation has had a positive effect on everyone and we'll see a real grip on the character. 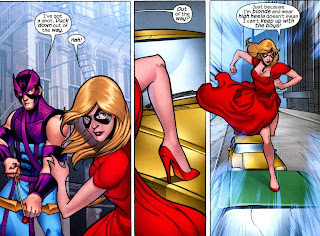 Anyway, I'm rambling (and probably not doing THAT good a job representing a favourite of mine), so I'll finish by saying this: I didn't JUST choose the Blonde Phantom because she's my favourite female in comics, or because her costume is the best, or those two recent appearances. No, I also chose her because we're on our FIFTH CHARACTER AND WE'VE ONLY HAD MEN. I mean I know we're exclusively a group of men at the moment (though I have my feminine moments), but geez... C'mon guys. Femme it up a little!

Read about The Blonde Phantom at:

Wikipedia!
The Marvel Database!!
ON AN OLD GEOCITIES PAGE OF JESS NEVINS'!!!
Written by Maxy Barnard at 5:34 AM