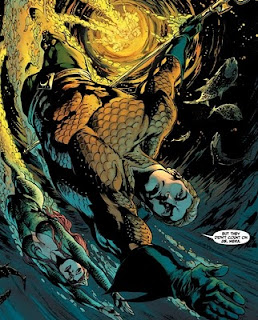 Created by Paul Norris and Mort Weisinger, Aquaman debuted in More Fun Comics #73 - and boy have a lot of people had fun with him. He's been mocked and ridiculed throughout all facets of pop culture; because of the supposed 'uselessness' of his powers? Because of his 'lame' costume? I'm not entirely sure why. All I know is, he's an easy target; for example, my initial script idea involved a splash page of Aquaman predicting the Netherlands to win the World Cup - contradicting 'Paul the psychic Octopus' prediction of a Spanish win (if you don't know what I'm referring to, Google it).
I still chuckle when I envision that page, Aquaman face-palming himself because he's contradicted Paul; but I decided not to go ahead with it, simply because mocking Aquaman is easy. Everybody does it. What nobody's done, however - for me, anyway - is scribe an Aquaman tale I've actually had an interest in reading. The only Aquaman I've ever enjoyed were his appearances in Grant Morrison's JLA; I've tried reading his solo series, picked up the available trades - but nothing's ever held my interest. That's why I selected Aquaman as this week's character. I want to love Aquaman. He's a DC character; he's a member of the Justice League! (Or at least he was - who knows what the current roster of that team is...) 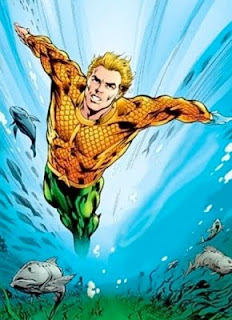 The character has so much potential - he's the king of Atlantis! And I don't care what you say about his powers, I wouldn't say no to telepathic abilities combined with superhuman strength and durability. I believe Arthur Curry - aka Aquaman - can be so much more than he is. He can be an A-lister. He just needs a writer to come up with a brilliant idea for him.
Perhaps that writer will be posting his or her one page script during the week.
Or if not - if the writer goes for a humorous take - at least we're gonna chuckle!

Aquaman is a character owned by DC Comics.
Written by Simon McDonald at 1:30 PM