The Question - About Face - James McNeill

It's been business as usual in Gotham. One night, Renee encounters someone she's been hoping not to see for a while.


1. Renee stands with her back to us, looking down a dark alleyway. The only light comes from a dim streetlight, off-panel, to her left.

2. Same angle, lower down; Renee reaches for her gun. In the background to the right of the panel, the speaker leans against the brick wall at the end of the alleyway. We can't see anything of him but a silhouette, only dimly lit on one side by the streetlight -- not enough to identify him.

MYSTERIOUS SPEAKER: You had a face last time.

3. Renee draws her gun and aims it at the mysterious speaker. We now see her face, which is completely blank, hat drawn low over where her eyes would be.

RENEE: How do you know who I am?

4. The mysterious speaker's lit side. He's wearing a nice suit and tie from what we can see.

MYSTERIOUS SPEAKER: You'll need to hide more than your face to hide from me.

5. Large panel. Part of the mysterious speaker's face can be seen, dimly lit from the streetlight side. His face is handsome enough, and he's smiling. The real clue to his identity is his two-tone tie, and the faintest suggestion of a wide eye and no lips on the shadowy side of his face.

TWO-FACE: I know about changing faces.


(Subsequently Two-Face reveals he's been having her followed. He makes her an offer she'd normally refuse, but would give her a singular chance to infiltrate his crime ring. But will she end up in over her head?)

And as a sort of bonus... Whenever I write script, I first sketch out what the page will look like, as it's much easier to visually describe what I see than what I'm thinking. Usually I do this on scratch paper, but this time I did it digitally, and thought I'd upload it to show you lot a bit of my process. Click the preview for a larger image, if you're interested. 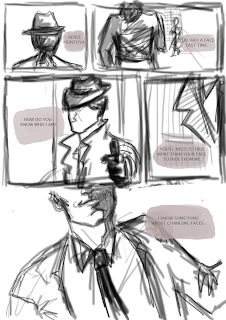 Email ThisBlogThis!Share to TwitterShare to FacebookShare to Pinterest
Labels: the question II