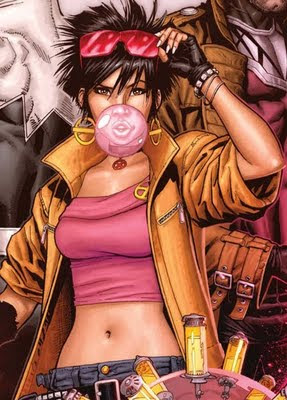 Honestly? Because I hate how she's treated now and am a HUGE Generation X fan. Like HUUUUUUUUUUUUUUUUUGE. But I'll get to that. Let's talk about what makes Jubilee a great character for this week on Thought Balloons, shall we?

A name that can only bring celebrations to mind, Jubilee is probably known by most as the chilli-dog eating, fireworks spurting member of the X-Men from the absolutely stunning 90s cartoon (and if you don't know the cartoon you're either ancient or a toddler yourself), and I expect that side of her is what we'll see more of this week than anything else. But there's a fair bit more to her than that, as you'd expect almost two decades after the fact.

No, since those early X-Men days she became a core character of the "best team book ever", Generation X, where her powers were explored to greater effect, revealing that Jubilee's powers actually have the potential to detonate matter on the sub-atomic level. That basically makes her a fusion bomb generator. You can't ask for more power than that really. Throughout that series she formed close friendships with characters like Husk and Chamber (the BEST Marvel character of all time), and an almost-romance with fellow team member Skin. Oh and she pursued a Hollywood career, but that didn't go too well, with typecasting and sexual advances becoming too great a set of issues for her.

Of course since then the years haven't been kind to the girl with the nonsensical name, as she got depowered after House of M, opened a half-way house in Queens that she swiftly abandoned, joined the anti-registration New Warriors team, almost died multiple times, appeared in a short-lived and painfully awful Robert Kirkman comic and most recently became a shoddy Twilight stock character and got vamped up in Victor Gischler's new X-Men series. 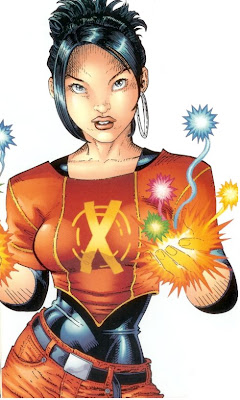 But I implore you to ignore all the awkward stuff that's happened in those recent years. Instead just take a crack at a character that is the embodiment of 90s youth culture at its finest with a power set that carries a fair bit of potential.

ch'yeah, and an excuse to use hip 90s comics slang.

*Ahem* If you wish to contribute an entry to Thought Balloons using this character, enter your script into the comments on this post. You know you want to!
Written by Maxy Barnard at 4:11 AM

Email ThisBlogThis!Share to TwitterShare to FacebookShare to Pinterest
Labels: Jubilee