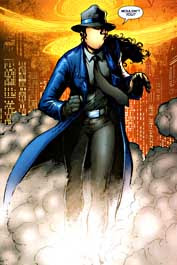 We at Thoughtballoons tend to have a great love for the street heroes, the rough and gritty. The Question has definitely got that aspect covered, trawling the streets of Gotham City with no powers but the ability to conceal her face. And yes, I said "her" -- I'm talking about Renee Montoya, the second Question, originally of the Gotham City Police Department.

See, Renee's not just badass, she's good at her job. She worked with the GCPD for a long time, showing up in various Bat-comics long before she ever got her own comic. She was the only one who ever managed to get through to Two-Face (by means of Harvey Dent). She served a long time before the fateful day her partner in the force was killed, and then managed to rise from her despair (with a little help from Vic Sage, the original Question) to play an integral part in the events of 52, eventually taking up the mantle after Vic's death. She's got 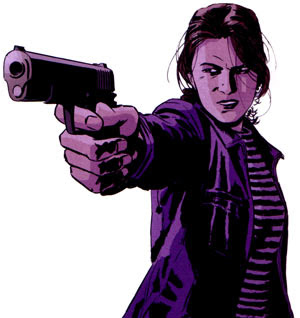 History with a capital H with Kate Kane, also known as Batwoman; though they're no longer involved, the sexual tension between them is all kinds of crazy. Renee's had as much of a struggle fighting her inner demons as the outer ones, but that's what makes her such an interesting character.

I know I've had a blast writing her, and I just hope the rest of you have as well.

Email ThisBlogThis!Share to TwitterShare to FacebookShare to Pinterest
Labels: the question II