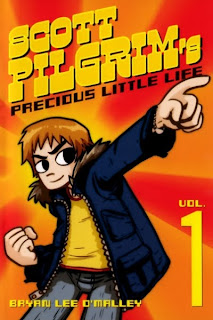 Because, in simple words, this is Scott Pilgrim's finest hour. Not only did the sixth installment of the series come out in the past month, to critical acclaim and great sales, but there's also the movie adaptation that is being released this very week upon unsuspecting masses, and an old school video game tie-in. Whichever one is your preferred media, Scott Pilgrim has got you covered.
I also chose him because so far we have had all characters from Marvel and DC, and I liked that this would present a challenge to my fellow ThoughtBallooners. Not everyone has read all of the books, and that's fine, because no one has read every Superman or Iron Man appearance either. The character also lends itself to comedy, something that is harder to write in a single one page script.
But most of all, I want to see who is the first one that does "Scott Pilgrim: Noir". Stay tuned this week for more of Scott Pilgrim vs. Thought Balloons!