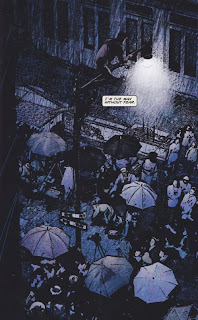 It was always going to come to this, I just didn't think it would be this soon.
I'd been meaning to wait some time before playing what I feel is my trump card but when my choice came around right now and I saw everything happening with Shadowland it just felt right to do it, and I figure this guy is a man who knows that you do something when it feels right.
I've been a fan of the blind lawyer of Hell's Kitchen, Matthew Michael Murdock, since I was in early schooling years. There was just something about him and his billy club that was cool and I still believe in that.
Daredevil has been in print since 1964 and in that time has spawned plenty of damn fine stories (many of which you can purchase using the handy Amazon links below:) There are so many Daredevil stories that I could just read again and again and it's because the man is as important as the mask. Matt Murdock is a star character, at least when written well, and that's the part I love. His friends are better than his rogue's gallery at times and when preparing to write my script there were so many options to play with that it was hard to make a choice. In fact, if the week gets slow I have at least 2 other scripts I might throw up here because that's how much I love Daredevil.
You can throw anything at him but he'll just keep on trying, doesn't mean his life won't suck but he'll do his damnedest to persevere. He works against psychological villains, he works against deranged monsters, and he works against, and with, femme fatales. He's the character that can just about go anywhere and make it work, if the writer is good enough.
So, enjoy what we have to offer this week because so many writers do their best work on Daredevil and I'm sure it'll be the same with us.

I'd recommend all of these trades as absolutely worth buying and how many characters can you say have these many must read storylines?
Written by Ryan K Lindsay at 7:52 PM

Email ThisBlogThis!Share to TwitterShare to FacebookShare to Pinterest
Labels: Daredevil