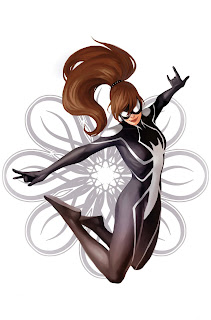 Because, quite simply, it can be nice to keep things current around here. And with Marvel's new Spider-Girl about to get a new series, and her team title just being announced as cancelled, you can't get more current than this.

Well, that and she's one of my favourite women in comics, and her new costume is just SO good.

But who is Spider-Girl? And for that matter what's an Araña anyway? Well, I'll tell you. Created by Fiona Avery and Mark Brooks and spinning out of the mildly controversial Spider-Totem material in Amazing Spider-Man, Araña is a young formerly super-powered Puerto Rican teenager, who was pulled into the spider society as the new hunter, until the end of her 3-volume series, where... it just kinda stopped. Since then she's been trained by Ms. Marvel, had her super-powered armour ripped off of her, and inherited Arachne's old costume in the wake of the incredibly popular Grim Hunt arc in Amazing Spider-Man earlier this year. 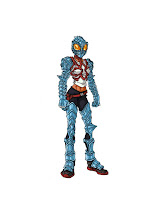 At current she's off double-teaming with Nomad frequently in both the Nomad back-ups in Captain America, and in the recently cancelled Young Allies, in which she finally accepted the title of Spider-Girl. The truly important development for her though is the new eponymous ongoing series by Paul Tobin and Clayton Henry in November, which promises such gems as our powerless heroine taking on the RED HULK of all people. And if that doesn't make you interested in the character, then perhaps this plentiful week of thought balloon entries from our esteemed writers will psyche you up.

Read about Araña over at:
Wikipedia
Marvel Universe
Marvel Wikia

As always, if you wish to contribute a script of your own and join in the fun, stick in the comments of this post, where it'll most certainly grab the attention of just about every classy person in the land.
Written by Maxy Barnard at 4:07 AM

Email ThisBlogThis!Share to TwitterShare to FacebookShare to Pinterest
Labels: Araña