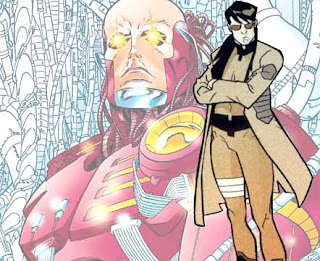 I mean, sure Machine Man has a pedigree that would make any other character blush. He was created by Jack Kirby for a comic book adaptation of 2001: A Space Odyssey, and later creators that worked with him include names like Steve Ditko, Marv Wolfman, Herb Trimpe and Barry Windsor-Smith. He's had several ongoing series in the past, but none of them were really that commercially successful. Ask any fan what their favorite Machine Man story was, and you would probably get a blank stare.

But then, Warren Ellis in his infinite genius/madness, decided that this character, who is a robot, needed a different attitude. In the pages of Nextwave: Agents of H.A.T.E., we learn that Aaron Stack (his name, which he now prefers to Machine Man) has grown a large distaste for humans, and has rewired his own robot brain to enjoy alcoholic drinks. And so, the modern take of Machine Man, an alcoholic sociopath with lots of tools at his command, was born.
Written by Matt Duarte at 10:42 AM