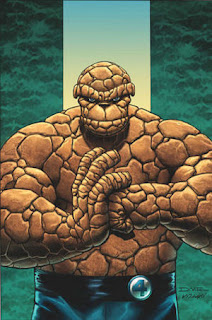 When asked who his favourite Marvel character is, executive editor Tom Brevoort always answers Ben Grimm, the Thing. I have no problem understanding why. Like Peter Parker, Ben Grimm is an everyman, someone we can all relate to. But if Peter is the conscience of the Marvel Universe, Ben Grimm is the heart. He's also a tragic figure - while the rest of his family were given amazing super-powers and got to keep their devastating looks in the bargain, Ben ended up transformed into a rock encrusted monster. Is it any wonder he's prone to bouts of depression, anger and resentment?

In the end though, Ben always comes through. Because he's got a heart as big as all outdoors, he'll help anybody out in a pinch. Be honest, if you were facing down an army of rampaging Doombots - who better to have on your team than Aunt Petunia's favourite nephew? 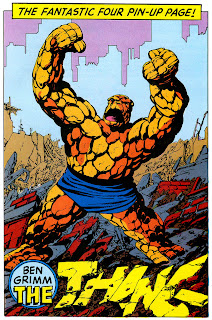 Email ThisBlogThis!Share to TwitterShare to FacebookShare to Pinterest
Labels: The Thing