Getting to know Matt Duarte

Who is your favourite comic character?
I was going to say Spider-Man, but it seems that everyone else beat me to the punch on that one, hasn’t it? I do love me some Spidey. 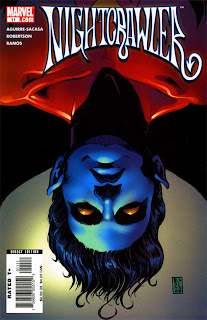 Aside from that, I think one character that I feel is my favorite is Kurt Wagner, A.K.A. Nightcrawler. I was a big X-Men reader when younger, and I always liked that Nightcrawler is a man of contradictions, one who doesn’t appear what he is, despite all signs to the contrary (and I’m not just talking about his physical appearance). When he’s used right, he can be one of the most interesting characters in comic-dom.
What is your favourite comic?
This question is far easier, just one word:
NEXTWAVESTUARTIMMONEWARRENELLISEXPLOSIONSKICKS.
Ok, that might have been more than one word. NextWave: Agents of H.A.T.E. is the perfect distillation of what comics can, have, and should be in one neat package. Written by Warren Ellis and illustrated by Stuart Immonen, it stars five D-lister characters on a mission to take down a huge terrorist organization. Immensely fun doesn't even begin to describe it. It is both a love letter and a flaming bag of turds in the medium and industry’s door step. If you think that doesn’t make any sense, then you haven’t read NextWave, and I hate you for it.
Who is your favourite comic writer?
Jason Aaron. I’ve read pretty much everything that the man has written, and I haven’t been let down so far. Whether it’s the slice of life drama pieces in his creator owned work in The Other Side and Scalped, or the great handle he has in characters like Ghost Rider and Wolverine, he provides fun and entertaining rides all the way to the finish line. And on top of that, he’s only been writing comic for like five years! There is so much more that we can expect from him.
Aaron is also an inspirational figure for me: he’s a down-to-earth character, a normal guy that showed that through hard work and perseverance, no matter at what stage of your life you are in, you can pursue your dreams and achieve. Man, that’s sappy, isn’t it?
Who has been the most fun to write so far in 26 weeks of thoughtballoons?
I generally like cheery and funny characters, so basically any character that is not constantly moping and wallowing in self tragedy has been pretty fun to write. Araña, Jubilee, The Thing, and Scott Pilgrim all come to mind as some of the most fun I’ve had writing here for thoughtballoons.
Which is not to say I don’t enjoy writing melodrama either. I’ve written some pretty heavy pieces that I enjoyed quite lot, like Daredevil, Constantine and Silver Surfer to name a few.
If I had to choose, it would probably be Machine Man. Ironically, in my script, he only had one single line of dialogue, but the writing the set up to deliver that line was loads of fun.
Which character do you most dread having to write?
None.
Alright, that sounds pretty vain, but let me explain. Every character has a handle, the really difficult thing is finding that handle and carrying it comfortably within your hands. Finding it may be a matter of time and perspective, but it is always there, and once you find it, you’ll realize it was always there, you just couldn’t see it. The thing I dread the most is not having enough time to find the right perspective on any given character. I think I’ve done pretty good with characters that I had no idea what to do originally, and I honestly I could handle anything thrown my way.
Alright, alright, enough with the reach around answers, here’s a character that I dread: Wonder Woman. Too much history, too many conflicting views and takes, and too much expectation from readers.
Which non-comics character would you most like to write?

I think writing Harry Potter would be loads of fun, mostly because it would be a challenge.


Which script do you think has been your best so far?
Based on critical reaction, I think my Iron Man was the most well received. I really do like what I did on that one, and I still think it was a clever idea, which is surprising as it was my first script for the site. My Spider-Man script also seemed to be quite liked, and considering it's everyone's favorite character, I think I did alright.
I’m really proud of the idea that I came up with Casanova Quinn, though perhaps not in the execution. I really would have liked to expand it further, and I think it would have fared better with more space to stretch it’s legs.
The one that I surprised myself with the most is my Superman script. It’s one of those characters that a lot of people struggle with, and I found the voice and scene easy enough.
Which script in total do you think has been the best on the site?
Everyone has done good work, and I could spend a whole other paragraph detailing everyone’s best pieces, but I’ve written enough as it is. If I had to choose a favorite (and it’s a bit of a left-field choice) but Rol’s Molecule Man script was just the perfect mix of humor, pathos, and character work. Just a scene that worked on every level.
Written by Matt Duarte at 7:52 AM

Email ThisBlogThis!Share to TwitterShare to FacebookShare to Pinterest
Labels: Getting To Know Thoughtballoons, Matt Duarte