Getting To Know Max Barnard

Who is your favourite comic character?
-Chamber (Jono Starsmore), of Generation X fame. Say what you like about your supermen and wolverines, Chamber is where it's at. Man's a sullen english youth, jaded with the world because HE HAS AN EXPLOSION OF ENERGY FOR ORGANS... And his jaw. He's been in some great stories and had a unique look that sticks with you (and even now as a descendant of Apocalypse his look is pretty damn interesting). And that's all we can really ask for, isn't it?

If you've never given the character a chance, or haven't even heard of him before I implore you all to pay attention to new trades in your local comic shop in the next few weeks, where Generation X Classic vol. 1 (UK) should be hitting shelves at some point. You need it.


What is your favourite comic?
-Currently or all-time? Because at the moment it's undoubtedly Peter David's X-Factor, a woefully underrated series that blends comedy and tragedy in ways that other books can only dream of. All-time though... That's a doozy. It's a toss-up between Fantastic Four/Iron Man: Big In Japan by Zeb Wells and Seth Fish, or the Chamber miniseries from a few years back by BKV and Lee Ferguson. Go get a coin, decide for yourselves! 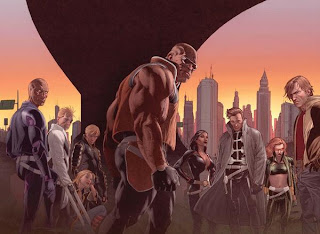 Who is your favourite comic writer?
-Again, Peter David rears his lovely head again here for pretty much the same reasons I love his X-Factor, but have to give this to Zeb Wells, who just *gets* every character he writes. Not just that, but Wells gets to write stories beyond anything you'd expect with a distinct scripting style that manages to represent his scripting ability whilst also catering to whichever FANTASTIC artist he's managed to get his jammy hands on. In fact I think I can say that he's not only my favourite writer but also totally who I aspire to be like in my own writing. No idea if that's showing in my stuff around here yet.


Who has been the most fun to write so far in 26 weeks of thoughtballoons?
-It's a cliché to say Doctor Doom, but I'd be a liar if I said anyone else. There's just something magical and captivating about this thoroughly insane yet regal presence (or at least he likes to ACT like he's regal), capable of doing just about anything better than anyone else. Not just that, but a line that I'd have to dismiss from a script for being hammy when writing any other character? Never happens with Doom. Man's the very SPIRIT of ham. He is, in fact, the Ham Supreme. True Story. And all that from a guy who debuted blackmailing four heroes into stealing Blackbeard's treasure. SO fun.

I have to give a shout-out to Renee Montoya here as well, whom I enjoyed so much that I'd been writing further pages starring her (the first few of which can be found HERE, with the rest to appear in 2011). However I have to disqualify her on the basis that I changed her characteristics a fair bit for the sake of my elseworlds-style tale.


Which character do you most dread having to write?
-I generally have a good time with any character I'm writing. I mean I'm not a hater, any character has potential, doesn't it? But there ARE character's I find so uninteresting I honestly don't think I'd have anything to say with them. Most of them come from independant comics, where there's far less room to move away from how a creator has defined the character. Also any character from a sodding zombie comic. I'm entirely sick of zombies by this point in time. Especially anyone from that godforsaken series The Walking Dead, overrated comic series that it is.... Oh... Wait.

Oh, and I honestly don't think I could do anything interesting with Hal Jordan or Barry Allen. There's just nothing to them. Completely lacking in personality, the both of them. 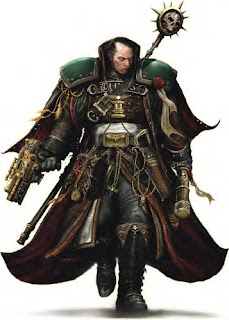 Which non-comics character would you most like to write?
-Inquisitor Gregor Eisenhorn from Dan Abnett's brilliant trilogy of Warhammer 40k novels, Xenos, Malleus and Hereticus. He's such a well-defined character with so much more depth than you initially see. Not just that but he's a character with a lot of undefined history from his earlier days. Seriously, writing up some short tales of a younger Eisenhorn would be a dream come true for me.


Which script do you think has been your best so far?
-My Mephisto script, "Ambrose Burnside". It's what I perceive as me at my writing best, telling a story that uses the existing character in a new way alongside something very real, which in this case was historical figure Ambrose Burnside, the man responsible for sideburns. I researched, retooled and put in some real time into making a script that really displayed where my strengths were. And now I have to spend the rest of my time on the site trying to top it.

And of course again I have to mention Renee Montoya - Noir As Heck, because that was so very unlike anything I've ever written and completely just 'pops' for me.


Which script in total do you think has been the best on the site?
-Sime McDonald's The Thing script, "Man of the People". I'm not one for thinking in all that much great detail about current events, but what Sime managed here showed that not only can someone use the current state of the real world as a great spring-board for stories, but also that you can do it whilst keeping everything in-character and incredibly well-scripted and paced, something that certain professional creators would do well to observe. I doubt I could ever do a script like that myself, and it pleases me to see Simon reach such a grand level of quality. And considering he tops himself every week, that's REALLY saying something.

Great, now it seems like I'm downplaying everyone else. DON'T HATE ME, I LOVE (almost) ALL OF YOU!
Written by Maxy Barnard at 3:22 AM

Email ThisBlogThis!Share to TwitterShare to FacebookShare to Pinterest
Labels: Getting To Know Thoughtballoons, Max Barnard