Getting To Know Rol Hirst

Who is your favourite comic character?

Peter Parker, the spectacular, amazing, sensational Spider-Man. I explained why when I chose him as my first Thoughtballoons pick. The only problem is I don't get to pick him again... 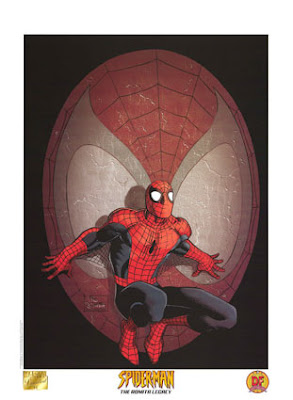 That would have to be Amazing Spider-Man too. I've been a Marvel junkie for over 30 years and have a lot of time for all the classic Lee / Kirby / Ditko creations, when handled correctly. I've dallied with DC - favourites being the Giffen DeMatteis JLI and Grant Morrison's Animal Man and Doom Patrol - though the only DC character I've stuck with through thick and thin is John Constantine, Hellblazer. Favourite comics outside the mainstream have included Cerebus (before Dave Sim went bonkers), Phonogram and anything by Adrian Tomine.

Hey, I'd have just give you a 3 word answer, but that's not everybody else is doing, now is it?

Grant Morrison, JM DeMatteis, Peter David, Brian K Vaughan, Mark Waid, Ed Brubaker, Roger Stern, Warren Ellis and Peter Milligan have all distinguished themselves in my eyes, among many others. Not forgetting Stan Lee, of course, without whom this world would be a much poorer place.

Who has been the most fun to write so far in 26 weeks of thoughtballoons?

The obvious answer is Spidey, but the pressure was on for that and I ended up feeling a little self-conscious. My other two choices were John Constantine and Ben Grimm, and I had loads of fun with both... though having gotten my Holy Trinity of Comics Characters out of the way, I'm having a devil of a time deciding who to pick next time it's my shout.

Other than those, the most fun were Machine Man, Gamora and Ash. Although I had got Gamora completely mixed up with Nebula. I'm not sure anybody noticed.

Loath though I am to fall in line with my peers, I have a real problem with Green Lantern too. I'm not good with intergalactic characters and the whole "green ring that can do absolutely anything unless there's yellow involved" has always seemed like one of those dopey concepts that would have been best left in the Silver Age. Plus, despite reading GL for a number of years in my younger days, I never liked Hal Jordan. I could just about squeeze out a Guy Gardener script... or G'Nort. G'Nort would be fun. I bet he's dead now, isn't he?

My favourite fictional character who's not been bitten by a radioactive spider is Detective Andy Sipowicz from NYPD Blue. A complex, multi-layered, extremely tragic hero with any number of achilles heels... who just happens to hate most of the people he meets on a daily basis... but still tries to do well by them. And if Andy was taken, I'd choose Gregory House MD for many of the same reasons.

I was pleased to fit an entire locked room mystery into one (admittedly crowded) page in my Blonde Phantom story. Max Allan Collins would have done it better though. And I had loads of fun pitching Mr. Mxyzptlk against Zatanna. But the one I'm most proud of so far would be my John Constantine yarn. It was hard as hell capturing everything I love about that bastard mage on just one page, but I gave it my best shot.

Worst by far was my Daredevil offering, for which I won't even provide a link. Such a great character, and I threw away my chance on a dumb fat bloke gag. What an idiot!

Ryan's Mephisto page sticks in my mind as a really clever concept and I'd have loved to see where his Daredevil story went next.

Ben's Spider-Man script really came from the heart and his Rick Grimes tale was a simple idea, perfectly executed.

Matt's John Constantine page was ripe for development and I only just discovered his Thing story (somehow I missed it first time round) and it's bloody marvellous.

Max consistently wins the prize for most inspired story titles. Noir As Heck and Boys Are Stupid, Throw Grappling Hooks At Them are just two that somehow live up to their seemingly impossible promise.

Simon's John Constantine script played like the teaser for a TV series I'd have sold my soul to watch and he writes a mean Damien Wayne too (albeit in Renee Montoya's script).

Brandon hasn't been around half as much as I'd have liked given the quality of his Mephisto page (among others).

And finally, Danial dazzled us so much from the comment box trenches he was an obvious call when a frontline vacancy came up. I look forward to reading more from him, especially if they're as strong as his Casanova Quinn offering.

What - I was only supposed to pick one? Says who?

OK, is that everything? Thank you. Now go read my Rick Grimes script. You know you want to...

Email ThisBlogThis!Share to TwitterShare to FacebookShare to Pinterest
Labels: Getting To Know Thoughtballoons, Rol Hirst