Getting To Know Ryan K Lindsay

Who is your favourite comic character?

I guess it still has to be Daredevil/Matt Murdock. I make note of the civilian name because he's just as compelling out of the spandex as he is within. When he's well written, there's no better character to read about. He's a damn fine hero, he's got a way with the ladies, he's always struggling with internal diffficulties, and sometimes he's even funny. It just doesn't get any better than Daredevil...when he's well written. Luckily, there have been stacks of really good writers, and artists, on the character over the decades so there's plenty to go back and read, as I'm sure there'll be plenty more to come. 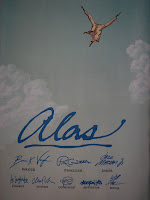 In terms of being the best all round comic, and not having lulls, I have to name Y: The Last Man. Sixty issues of pure brilliance from sublime character development to hilarious quips, this title had it all. It's something I can easily go back and reread quite more often than you'd think. Issue #57 is hands-down the greatest single comic issue ever written and I've gone through those pages dozens of times. There's nothing to fault. Not to mention it is one of the few titles to hang a story out for so long and then completely spot the landing.

This one can be hard to quantify as it's sometimes an answer in flux. Knee jerk reaction is to say Brian K Vaughan. Purely based on Y, Ex Machina, and Pride of Baghdad, not to mention what I have read of Runaways, puts him ahead of most other writers. The way he forms a page to stand alone and have three beats is a beauty to behold, the man is a genius of the form. I even liked his Chamber miniseries. BKV is always a winner, I just wish he was writing something right now. He currently has nothing hitting the stands and that hurts me.

Bonus points go to Ed Brubaker who has crafted far too many classics to not get a mention from me. Run through the hits and you get Sleeper, Incognito, Criminal, Daredevil, Cap, Gotham Central, even his lesser work like The Marvels Project is still tight. Jeff Parker has been impressing me lately. Scott Snyder has much room to impress me, and all the time in the world.

Who has been the most fun to write so far in 26 weeks of thoughtballoons?

I must admit it was fun to write Daredevil, but it seemed like I wrote his world more than him. Zephyr Quinn is a blast to write, as is Damien Wayne, but neither of them were even the focus of their scripts, or shouldn't have been, ha. The Blonde Phantom was a blast and John Constantine surprised me with how fun he could be. Hmmm...seems I don't always write the character, or in character. It was stacks of fun putting Ben Grimm into a new setting and role.

Nearly anything DC scares me, quite honestly. I just don't feel like I get it, even though I always come through with something when the need arises. If I had to settle on a single character, for some strange reason, I'm going to say Green Lantern. He's been in the back of my head since before I started all of this and I still have no idea for him, ha. Other than that, I figure I can research and get inspiration for nearly anyone.

Oh, there's a few. Tyler Durden. Banky Edwards. Sawyer/James Ford. James Rockwell. The list could go on for quite some time. But I honestly think the characters I most want to write that haven't been in comics yet are the ones I create. Well, all of them and John Doe from Se7en and Det Mills.

I remember at the time every raved about my Aquaman script, which is weird because if I'm not DC then I'm certainly not Aquaman...so, let's look. Wow, it's interesting to click my name on the sidebar and then read all of my scripts. There's so much I forgot I wrote, lines of dialogue, ideas, whole characters. Damn. I must say I'm actually quite proud of the Silver Surfer/Machine Man two-part crossover I wrote, that was fun. I really dig the Scott Pilgrim page where I scripted it in tone like an old EC horror tale and crossed him over with Splatterhouse. But the page I'm most proud of, and one I could honest to goodness see being in a real comic and starting a tale would be my Daredevil page. I bring back Man-Bull and I think it works well to set the scene and built some much needed interest in the character.

There have been so many good scripts. This is a really hard question, but one with plenty of answers. I just need to man up and give a response. I can remember in the very first week being floored by Sime's Iron Man script, The Armoury, because he dropped such a cool idea, and in the very first week, and later painted a portrait of The Punisher that was quite touching. Rol nailed a great Constantine script that took the character into something new, which I dug on greatly. I was impressed when Ben dropped all guises and offered us heart in his Spider-Man script of pure emotion. Brandon made Mephisto go to The Avengers for help in a great little page. Max's Renee Montoya, in Noir As Heck (just a great title), was a solid piece from him, and uncharacteristic, though I did appreciate him offering up Archie to Constantine, as well. Rol's The Thing page worked on so many angles and gave us so much. But my favourite script, the one I wish I had written, was one that came through recently. I was massively impressed with Matt's Casanova Quinn contribution as he set a wicked little page to The Rolling Stones' Paint It Black. It was just a page I could instantly see working and playing so well in that sandbox.

Is that all a fair enough answer?
If you've got any other questions for me just drop them into the comments box, I might just get around to them.
Written by Ryan K Lindsay at 9:10 PM

Email ThisBlogThis!Share to TwitterShare to FacebookShare to Pinterest
Labels: Getting To Know Thoughtballoons, Ryan K Lindsay