What the heck is tactile telekinesis?
I'd just read Superboy #30. Part 6 of 6 of a story arc called Losing It. I had no idea what was going on. This was August 1996. I was nine years old, and I'd only selected the comic because I'd seen the 'S' symbol on the cover, and Dad had promised me some reading material during a car trip. Honestly, I can't remember how much of the plot I absorbed at that age. I just loved the pictures. But I recall Superboy referencing his tactile telekinesis, and I had no idea what that was. I asked my father; he couldn't answer. To be fair to him,   I believe I was miss-enunciating the term. And so, because I wanted to know more, I began to pick up Superboy on a semi-regular basis and I've been a fan ever since. 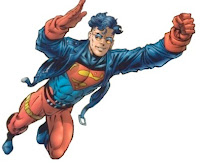 There are so many facets to the character of Superboy, aka Conner Kent. He's a clone of Lex Luthor and Superman. He's a kid, a teenager, still trying to find his place in the world. He's a member of the Teen Titans. He's best  friends with Red Robin. And finally - finally - he's ditched the leather jacket and sunglasses in exchange for jeans and a t-shirt. The kid has style - unlike his 'cousin,' who continues to wear his undies on the outside of his pants.

And he has tactile telekinesis!
Superboy #1 launched last week from DC comics, scribed by superstar Jeff Lemire and illustrated by the supremely talented Pier Gallo. I can't think of a better time for the Thoughtballooners to have a go at him.
Written by Simon McDonald at 9:27 AM

Email ThisBlogThis!Share to TwitterShare to FacebookShare to Pinterest
Labels: Superboy