[I really liked Adam's breaking of the fourth wall in his play-at-home script, and because it was on my mind, all of my own ideas began revolving around similar themes. This is where they coalesced...]

PAGE TWO (six panels)
PANEL 1. Ben Grimm is in Reed Richards' lab, pointing his thumb back over his shoulder. Behind him is a circular platform that is flaring up in blue and white particles, light-beams, and gases.
BEN:
Hey, Reed, you're dimensional thingy just powered up.
PANEL 2. Same view as Panel 1, except that Ben has turned towards the teleporter. Reed has also now snaked his neck into view so that he can read a display next to the platform.
REED:
Hmm, interesting.
REED:
Seems there's an incoming transmission.
PANEL 3. Amidst the beams and particles of the teleporter, a sheet of paper has appeared and is floating down.
BEN (OP):
Is that... just a bit o' paper?
REED (OP):
It would appear so.
PANEL 4. Ben is holding the paper up so that we are looking at the back of it. He and Reed (still with an extended neck) are looking at it curiously.
BEN:
Is this some kinda joke?
REED:
I don't think so, Ben.
BEN:
But that's us, right?
PANEL 5. Close up of Reed's face, deep in concentration, trying to understand what he is seeing.
REED:
Indeed it is.
REED:
Though this is far too elaborate to be any form of prank.
REED:
This only just happened.
PANEL 6. Close up of the page in Ben's hand, revealing it to be a comic page identical to Page 1.
REED:
Intriguing.
[As an added bonus, I thought I would give you all a glimpse of how I generally "write" my Thoughtballoons pages: Once the concept has been decided upon, I actually sketch the page, writing in the dialogue as I go. I then transcribe it into Blogger when I get home, tweaking it as necessary. Below is the sketch from this one...] 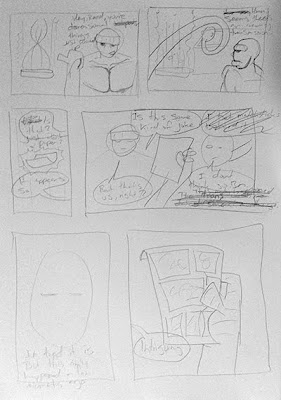