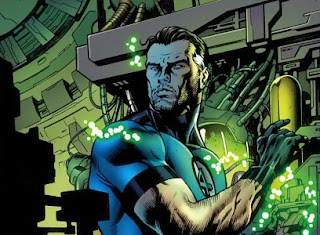 Reed Richards is one of the most important men in the Marvel U. He is one of the founding members of the club because he was one of the first. He has been around a long time and he’s survived plenty of action. He’s the original pioneer of landscapes unknown, he’s the father of the imaginaut generation that don’t mind a Marvel U with Negative Zones and world eating deities. He’s fought nearly every villain, teamed up with plenty of heroes, he’s just about the smartest guy on the planet (depending on who you ask), and he’s also the patriarch at all times of one very cool family.

I was never a real fan of the Fantastic Four. I just had no desire to read their comics but then Jonathan Hickman came along and made me pick up a few issues. As it stands now, it feels like Hickman’s run in its entirety isn’t as awesome as I want it to be, but there’s no doubting that his opening 3 issue arc ‘Solve Everything’ was one of the best stories to be told in the Marvel U for a long while. It finally made me get Reed and so here we are at the dawn of a new year and what better way to launch things than with this man. It seems only fitting considering we ended 2010 with the greatest villain from the DCU that we should start 2011 with Marvel’s greatest hero.

Just so long as no one writes/draws the man with massive pecs and a six-pack. That just isn’t right. The man is a scientist and even if he can stretch his body into being muscly I doubt he would want to. At least, that’s my stance.
Written by Ryan K Lindsay at 11:09 PM