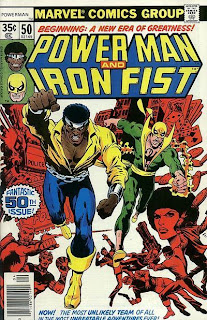 This is an intriguing question, for me, because I could have simply chosen Iron Fist on his own. And perhaps one day I will. But for now I have selected the duo because they work so well together. Two exploitation characters from the 70s (blaxploitation and the kung fu explosion) aren’t going to last long so in a last ditch effort to keep them afloat we get them paired together. And like salt and chocolate or beer and netball, they actually worked pretty damn well as a pairing. You needed a specific taste set to truly appreciate them but I feel overall this duo were a success.

I’ve read a lot of the old PM&IF issues, as I slowly track them down on eBay. They’re fun – that’s the biggest thing you get from them. There are other emotions and plot points on offer but mostly they are just fun. You can only get so serious with a big guy in a tiara and chain belt and his little buddy with the massive collar and yellow booties. You’ve got to have some levity in every issue and the series did it well.

Today, we have two status quo changes. Luke Cage now runs an Avengers team (who would have bet on that ten years ago?) and Danny Rand had one of the greatest runs of a superhero comic in a long time. Genius. The two remain staunch friends but they aren’t the dynamic duo any longer. They’re just two blokes with long history. 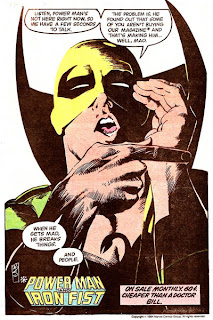 We also have Iron Fist now acting master to a young, and new, Power Man. A miniseries for these two just dropped, and it is damn fine fun. It channels the energy of the old series and that’s a very cool thing to find. Comics don’t have to be gritty and heart wrenching all the time, sometimes they can simply entertain.

When writing this week’s script you have plenty of choices to make. Will it be old school PM&IF or the new incarnation? Will it be a team up or just two ships passing in the night. Will Cage wear his old ‘costume’ or is being black enough of a new ‘costume’? You can tie in the Avengers or Heroes For Hire or the Thunderbolts because they’ve all got ties to these men.

But, ultimately, will you have fun writing it? I hope so.
Written by Ryan K Lindsay at 7:47 AM