Why J'onn J'onzz, the Martian Manhunter?

I love J'onn J'onzz
But I don’t know a thing about him. Not really. Not like I do the majority of DC’s other Justice League Members. Oh, sure, I know he’s a Martian. From Mars, in case you were wondering. He loves cookies. Seriously; loves them.  I know his biggest weakness is fire. And I’ve been told - umpteen times - he’s the heart of the League. Seriously, if I hear that one more time...
Aside from that, though? He's a mystery. I know bits and pieces; snippets of his backstory. And yet, somehow, I care about J’onn J’onzz. He reminds me of that friend we’ve all had in our lives, who is loved by everyone. If I was on the Justice League – and I am sure it’s only a matter of time – J’onn would be my best friend. He’s so compassionate. So nonjudgmental. Chatting to him would be therapeutic. Plus, we’d have a lot in common. Fire’s one of my biggest weaknesses, too.
Y’know something, else though? Take away those character elements, strip him down to the bare bones, and what’ve you got?
You’ve got a Martian with badass powers, man.
Telepathy? Yup. Shapeshifting? You better believe it. Super strength? Uh, duh. What else? Oh, just intangibility. Invisibility. Heat vision. Flight.
And a little something called Martian Vision. Now, I don’t know exactly what that is, but comparing that to Superman’s X-Ray vision? His telescopic vision? Please. I know which vision power I’d want. 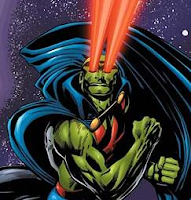 So, after Green Wake, writing J’onn J’onzz should be a cinch. He’s a complicated character, sure. There's a lot of continuity there. You want to deal with that, go for it. But he also provides the perfect canvass for a classic action-packed super-hero page; the kind that allows a writer the chance to forget the backstory and just write a fun yarn.
And after the depressing – albeit finely crafted, and possibly some of our best - scripts from last week, I think we could do with some good old fashioned super-hero goodness.
But as always, dear Thought-Ballooner, the choice is yours.
Written by Simon McDonald at 12:27 AM