My inspiration for this week's page is rather tangential. I read Ms. Marvel #1 quite a while ago, and sadly, the only thing I remember from the whole issue was my shock at seeing Jessica Drew smoking. So this page is kind of my response to that... 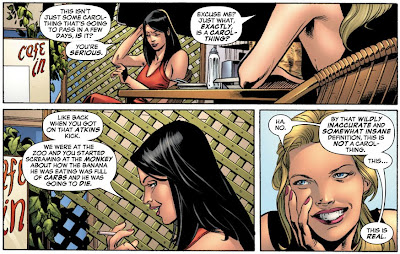 PANEL ONE
Close up of a feminine hand holding an unlit cigarette. This is the hand of Carol Danvers, aka Ms. Marvel.
CAROL: Do you mind?
PANEL TWO
Leonard Samson is sitting upon an a chair in his office. He is wearing a suit and has a notepad on his lap, informing us that at this moment, he is working his psychiatry job. He has a pen in one hand and is gesturing continuation with the other.
LEONARD: If it helps you relax...
PANEL THREE
Close on Carol's lips. She has the cigarette between them and the flame of a lighter is seen approaching the far end.
CAROL: It's not like it can HURT either of us, RIGHT?
PANEL FOUR
Close on Leonard. He looks disapproving.
LEONARD: I assume this new-found habit comes courtesy of MS. DREW.
PANEL FIVE, PAGE WIDTH
We now see a wide shot of Carol, laying on a psychiatrist's couch. She is in civilian clothing and is blowing a stream of smoke into the air. She appears annoyed at Leonard's remark. Her eyes are red and puffy from crying, and there is the slight shimmer of tears around them and down her cheeks.
CAROL: Would you prefer I take up DRINKING again, LEONARD?
CAROL: You might recall how THAT turned out last time.
PANEL SIX
Leonard is now learning forward on his chair. He looks sorry.
LEONARD: Ok, ok...
LEONARD: So why don't you tell me what brings you here.
PANEL SEVEN
Close on Carol. Her hand is holding the cigarette just away from her face, as tears now stream down her cheeks. She is visibly distraught.
CAROL: He's dead, Leonard...
CAROL: ... and it's all MY fault.
From here, Carol would lay on a sob story via flashback of falling for a non-powered "civilian" and then him being killed due to some villain chasing her... or something (I hadn't thought THAT far ahead :P )
Layout