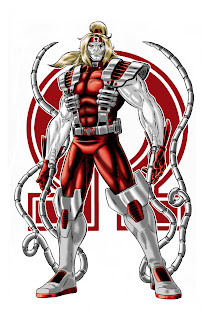 Omega Red (aka Arkady Rossovich) has always held a place in my heart, in that he was my first-ever comicbook villain. Back in the early ‘90s, my first and only comic was X-Men #4, which featured Omega Red as the lead antagonist. I’ve since learned that this was in fact his first ever appearance, so if you think about it, Arkady and I joined the world of comics together.
He was quite the villain too: He has a Healing Factor to rival Wolverine’s, only Red's needs to be recharged from time to time by draining the life-force from others, and is therefore referred to as his “Death Factor”. He is also able to secrete pheromones that are deadly to anyone in his immediate vicinity, and has long Carbonadium tentacles that he can extend and retract through openings in the undersides of his wrists (both the pheromones and tentacles act as conduits for his Death Factor). Basically, he’s just a serious bad-ass!
I believe that Omega Red is a sorely under-rated character, and if he could only break free of living in Wolverine's shadow, would be able to move on to bigger and better things.
Written by Danial at 12:00 AM