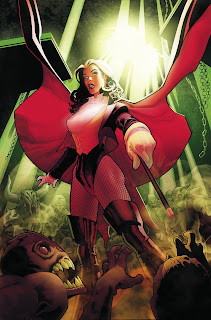 ‮What an interesting question! To be honest a lot of this comes down to me being REALLY into choosing female characters for this site. They're usually a lot more involving and take far more creative 'umph' for our group of manly men to write.

‮But just saying that would be a great disservice to such an enticing character. Zatanna Zatara is notable AMAZING. A backwards talking magician(really? Who woulda guessed that from this horrifically hard to read why post?) by trade, and frequent Justice Leaguer, Zatanna is the go-to character when dealing with anything mystical in nature in the DC universe. Which totally puts her ahead from the competition. I mean is Doctor Strange this attractive? No, but then they're both drawings so WHAT IS WRONG WITH YOU!

‮Anyway, all of this is doing a fair old job of bigging her up, but what stuff is their to mine when writing about Zatanna? Answer: A BUNCH OF STUFF. First and foremost she's been known for having a relationship with recent re-addition to the DCU and former Thought Balloons choice John Constantine, so any Alphas can just straight up resort to doing a script about the two of them. Secondly, she rather famously erased the JLA's memories following the horrific Dr. Light rape storyline in Identity Crisis, and though she's gone through a lot as a result of it, her guilt is still out there, ready for plucking if you want to make a more tragic storyline. Other than those two there's always her relationship with the Gotham City Sirens and more specifically Catwoman to play about with if you want to go all out girl power, as well as elements from her Seven Soldiers miniseries and her current ongoing to pluck at.

‮Still, I won't tell you what to do. I just hope that you all have something brilliant to bring to the table at the proper start of year two of Thought Balloons!

And if you want to kill me because I wrote that whole Why post using Cyrillic Millions then... I'm sorry.
Written by Maxy Barnard at 12:00 PM

Email ThisBlogThis!Share to TwitterShare to FacebookShare to Pinterest
Labels: Zatanna