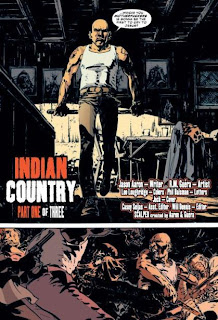 Have you read Scalped?

If you have, you already know the answer to that question. Dashiell Bad Horse is the lead character in Jason Aaron and R.M. Guera’s Vertigo title ‘Scalped’. He’s an angry young Indian who made it off the reservation but then found himself back as an undercover FBI agent. He’s a volatile and dangerous man who is handy with a forceful way and is one of the most flawed characters you’ll find in the four colour medium.

Dash isn’t a standard hero, he’s not going to ride into view on the horizon and save the day. I guess he is an Indian because he certainly isn’t a cowboy. Is it wrong to say that? If you’ve read the title you’ll know it’s not. Scalped throws out more racist invective and unpleasant wordplay than most people are used to in their day to day lives. Yet it never actually comes across as racist, it’s honest. There’s so much truth in this title and it’s usually in the form of gritty, brutal, or downright harsh. 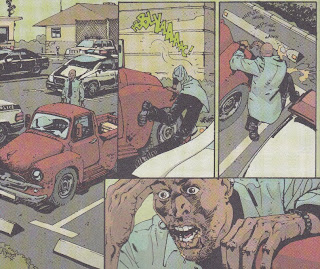 The important thing to remember about Dash is that he’s deeply flawed. He’s got more cracks than a sun-damaged face and he tells more history. It’s not that he can’t do the right thing, he sometimes does, but it’s more that he’s human. There are occasions where things don’t work out for Dash and yet he moves on. He survives. He doesn’t posture, he doesn’t lecture, he does. He is the constant motion of living in action.

The strength of Scalped, and its lead character, is that it’s extremely well written. This week gives us all a lot to live up to, but, like a goldfish, you only grow to the size of your bowl. This character offers a bowl extremely massive and so we’ll all have to puff up and deliver the goods, but if we don’t maybe we’re just as flawed as Dash. And hopefully we’ll all find some forgiveness.