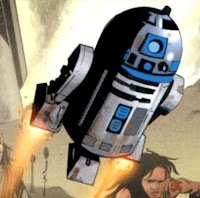 Short Answer? Because the Teenage Mutant Ninja Turtles were already picked.
Long Answer?
I probably took a little too much time thinking about who I wanted for my first thought balloons character choice. Ultimately, I wanted to pick something that had some kind of personal importance, and Star Wars fit that bill pretty easily.
So why pick R2-D2 specifically? Because even amongst the main characters, Artoo has a rather unique role, one that makes him arguably as centric to the story as Darth Vader. He’s only one of four major players that show up in all six movies, and of those four, he’s the only one to do it without dying (as with Obi-Wan and Anakin/Vader) or getting his memory wiped clean (as with his good pal C-3PO). Sure, he gets shot up a few times, but one of the advantages of being a Droid is that can take it.
It goes even further once you bring the comics into the equation, since apparently he’s still alive and ticking in Dark Horse’s Legacy series, set well over a century after the end of Return of the Jedi. Well put together little droid indeed.
The other major reason is that while R2-D2 been compared to “the family dog” by CGI Clone Wars director Dave Filoni, he’s much more than that. The loyalty is certainly there, but unlike most families that go through more than one dog over the course of time, Artoo is conversely the dog that goes through several families. And while no offense to Lassie or Scooby Doo, but I wouldn’t put my money on either of them figuring out how to get the Falcon’s hyperdrive working while there’s a Super Star Destroyer breathing down their necks.
Though to be fair, Krypto could probably put a few dozen holes in said Star Destroyer by flying through it several times and make the point mute.
So that’s why R2-D2. Not only does he probably offer one of the widest variety of options when it comes to his native setting, but he’s also a fun, lovable, iconic character in spite of never once saying a single line of intelligible dialogue. So go have some fun with him, and may The Force Be With You. 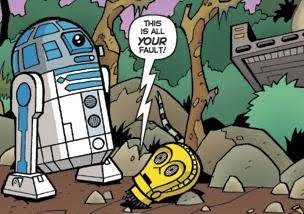 Email ThisBlogThis!Share to TwitterShare to FacebookShare to Pinterest
Labels: R2-D2, Why?