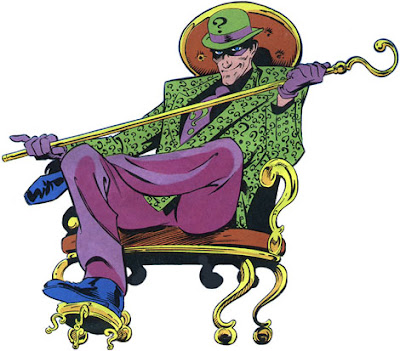 Riddle me this, boy and girls...

Which Batvillain walks on four legs in the morning, two legs in the afternoon, and three legs at night?*

Which Gotham rogue ties up Batman's brain more than his body, has a mysterious pun for a moniker, and makes question marks almost as fashionable as bowler hats?

Who's the one Batfoe even Jim Carrey couldn't kill? (Though he gave it a pretty good shot.)

He's a puzzle, wrapped in a mystery, called E. Nigma.

Why The Riddler? Hey, I'm not giving you all the answers... 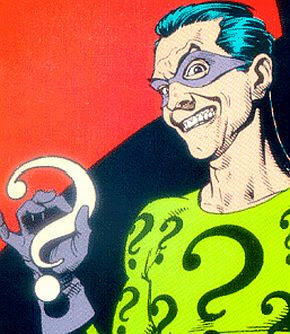 (*In the morning he's crawling through sewers to escape Arkham Asylum. In the afternoon he's standing tall as he launches his latest diabolical plan. At night he's hobbling about on his cane after taking another beating from the Batman.)

Email ThisBlogThis!Share to TwitterShare to FacebookShare to Pinterest
Labels: The Riddler