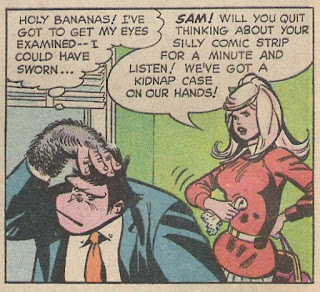 April O'Day manages O'Day and Simeon Private Investigations with her partner, and part-time comic book artist, Sam Simeon (who is also a gorilla).  Like the original series, this book would aim to be irreverently entertaining, presenting ridiculous obstacles for our titular heroes to best each and every month.  Although there would be overarching stories, each issue would attempt to present a complete tale, so that readers wouldn't have to read every single thing ever published to keep up (although they would be welcome - and encouraged - to do so).  There aren't enough humour books anymore.  Angel and the Ape would attempt to fill in that gap, while providing some enjoyable adventures for the reader to follow.  You could almost think of this book as being similar to the Batman: The Brave and the Bold series, in that there would often be guest appearances by other DC characters and usually a "case of the week" type scenario mixed in with the overriding concern.

ANGEL O'DAY - The driving force behind the O'Day and Simeon Detective Agency, Angel is a young, motivated 20-something who intends to make her mark on the world.  She is bright, energetic, witty, and able to get out of tight spots with surprising regularity (perhaps one of her most useful traits).

SAM SIMEON - The other half of O'Day and Simeon Detective Agency, Sam is a gorilla.  He is also a rising comic book artist, working for Stan Bragg, a neurotic editor at BC Comics.  Sam acts and dresses like a human, but he is definitely still a gorilla with all the characteristics that that entails.  He doesn't speak, although Angel seems to understand him nonetheless.  Other characters try to do the same, but few succeed.  There is the potential to make some good use of thought balloons here - not necessarily with speech, but perhaps images to illustrate some of his basic thoughts and imaginings.

STAN BRAGG - Editor at BC Comics, he often appears through emails, phone calls, or text messages berating Sam for being late or doing shoddy work (even though he is always on time and only delivers the best).  He also has a habit of laying elaborate traps for Sam when he visits the BC Comics offices.

The book would open with O'Day and Simeon Private Investigations not doing too great.  Jobs are coming in less and less often, and Angel and Sam are having trouble closing what few cases they have on the go.  Things just don't seem to be clicking the way they once did.  The two are getting a little burnt out.  It also doesn't help that Sam has recently been hired by Stan Bragg to be the artist on one of the flagship titles of BC Comics latest reboot, a task that is taking up more and more of his time.  Seeing that things aren't going well, Angel convinces Sam that they should take their show on the road, travelling through the country to meet and learn from other successful private investigators / detectives.  As their travels continue, they realize that their recent streak of bad luck is the result of someone or something actively working to thwart the two, a larger mystery that they must obviously solve before it's too late!

There would also be a minor B-Story, following Sam's continuing work on the BC Comics reboot, played out mostly through Stan Bragg's incessant (and often furious) communications with Sam.  This would be pretty irreverent and lighthearted, poking fun at comics and the industry, although as the series progresses, it might be more relevant to the troubles facing our intrepid heroes than initially thought.

The first issue would establish the status quo, showing the recent difficulties facing Angel and Simeon Private Investigations, their sudden inability to solve any of the cases they're working, and Sam's new gig at BC Comics.  Although she's been thinking on the idea for a while, after a particularly disappointing failure by the team, Angel convinces Sam that they should get away for a bit.  Sam is excited at the prospect of having some time to relax and work on his comic book work.  He realizes too late that Angel's ulterior motive is to hep them get their groove back by travelling from city to city meeting with other PIs.

From there, the two could travel the country, meeting with different investigators and increasingly difficult challenges in each issue.  They would start with Slam Bradley, getting some time to visit New York, learn some tips, and fight off the Royal Flush Gang.  The Question wouldn't be quite so cooperative, forcing the two to stretch their minds a bit to understand the knowledge he tries to impart.  Ironically, the two are too busy fighting off the Masters of Disaster while visiting the Elongated Man to benefit from the same type of intellectual stimulation.  Their visit with Jon Jones would be illuminating for a number of reasons, including his uncanny ability to understand Sam and the secret identity that he has (revealed at a key moment in the wacky adventure they'd have with him).  Detective Chimp would particularly sympathetic to their plight, developing a strong kinship with Sam after some initial friction between the two.  Finally, the two would travel to Gotham to see the greatest detective of all.  However, their attempts would be hampered by the Riddler trying to offer some unwanted help and Batman wanting them to prove themselves (this could be divided into two issues).

Realizing a key piece of the puzzle to the increasingly difficult and dangerous challenges that seem to be following them, Angel and Sam return home to confront the forces that have been plaguing them!  Once (if?!) they survive, this initial story arc would draw to a close, leaving Angel and Sam back on top and ready to face whatever wackiness might face them in Union City with their new found ally!

-------------------------------------
Sorry that this one is a little on the short / rushed side.  I encountered Angel and the Ape while back issue diving recently and knew that this was what I wanted to pitch for my turn this week.  However, I've been super busy lately, so it's all a little more rushed than I would have liked.  Either way, I hope that what bits I could offer come off as somewhat interesting and mildly appealing to you.  This is the kind of book I'd want to read, which is why I would be more than happy to write it.  If you're reading, give me a call DC ;-).

(See also: thanks to MK for switching spots with me.  Even with the extra time, I'm still rather late with this posting, but I suppose it's better late than never)
Written by Grant McLaughlin at 1:22 AM