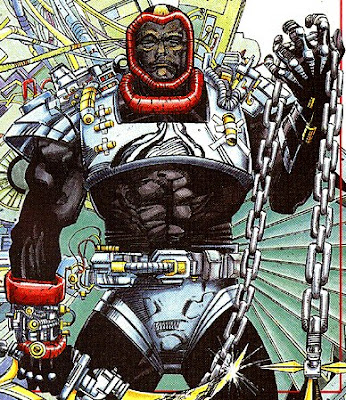 The high concept: Corporate espionage/sabotage on a new scale for a new DCU. Supported by a mysterious benefactor, Curt Metcalf is a prodigal inventor turned loose from his former, morally bankrupt employer, Edwin Alva Sr.. Unemployed, angry, capable, willing and funded, Metcalf is ready take on the seemingly endless web of corruption in front of him, as the technical monstrosity known only as HARDWARE!

CURTIS "Curt" METCALF: Hardware. A calm, hard-working prodigy with a seething alter ego bubbling underneath, fresh from forcefully leaving his employment at Alva Technologies with...
EDWIN ALVA Sr.: Sinister and calculating head of Alva Technologies, using the inventions of his employees for war profiteering and black market deals, all in the name of funding his attempts to literally immortalise himself.
REPRISE: Hitman with the power to gain "extra lives" from murdering others, hired by Alva to kill Curtis and protect Alva Technologies' secrets.
Lt. MARISA RAHM: Pre-op transsexual policewoman, independantly investigating Hardware due to his interaction with and possible connection to...
LEX LUTHOR: One of the possible benefactors of Curtis, and a person interested in procuring the company secrets stored away in Curtis' head, doing so by hiring...
MINDFLOW: The cerebral assassin (but not that one). A murderous close-range telepath, who kills by stripping every thought and brain function from his opponent into his own mind, or availability willing, one of the brains he keeps in a selection of jars.
BRUCE WAYNE: Another possible benefactor, the only disincentive being that he appears to have no motivation for funding Hardware. Could he have some secret angle to the situation?
TED KORD: Rumoured to have died as the vigilante 'The Blue Beetle' some time back, but in Curtis tracing his funds back to the source, his name continuously crops up.
THE SHADOW TRAVELERS: Anomalous humanoid shapes sent by Alva to steal information and items from rival companies. Their true nature is unknown, but they seem to have capabilities similar to that of an invention of Curtis' back from when he worked for Alva Technologies
BARRAKI YOUNG: Curtis' girlfriend, going through a whirlwind of conflicting emotions as she tries to deal with his increasing anger, his unemployment, followed by his sudden disappearances and mysterious earnings.

Overview:
Curtis Metcalf discovers that his inventions for Alva Technologies are being misused by their sociopathic CEO, Edwin Alva Sr. Curtis leaves the company, voiding his contract and blacklisting him from ever working in the technology field again. Scorned and enraged by the corrupt use of his inventions, Curtis accepts a mysterious opportunity to receive funding to be used EXCLUSIVELY for taking on Alva Sr.'s corrupt web of corporations and subsidaries as the technological marvel HARDWARE.

A B-story running alongside this is that of Lt. Marisa Rahm, who, whilst officially hunting a killer who appears to be in the employ of Lex Luthor, is also independantly investigating Hardware, who may have some connection to Luthor himself.

Outline:
This is an entirely fresh Hardware, reinvented, retooled and slightly retold for this initial outing, to make him more a part of the DCU, in the way only a tool of corporate sabotage can be, connecting him to the businesses that are noteable back-matter of the DC Universe. LexCorp, Wayne Industries, the apparently defunct Kord Enterprises, maybe even S.T.A.R. Labs. And that's just the ones that AREN'T connected to the evil Alva Technologies.

This opening story is a fairly straightforward re-establishing of Hardware, split into three parts, taking up roughly 8 to 12 issues:

The story starts with Curtis Metcalf shifting from his enjoyable and productive work at Alva Technologies to discovering that his employer, Edwin Alva Sr., is the morally bankrupt head of a network of corrupt businesses, all selling their wares and inventions on the black market, and even directly to Kahndaq, a nation on the precipice of all-out war with America. Confronting his boss and almost caving to violence, Curtis leaves the company, voiding his contract and blacklisting him from any future work in technology development for the rest of his working life.

This leads to Curtis becoming sedentary and hateful, straining his relationship with his co-habiting girlfriend, Barraki, to near-breaking point. One night, when everything seems to be at rock bottom, Curtis is visited by a mysterious suited man, who offers him funding on the condition that it is used exclusively to take down Alva's network of companies, and nothing else. Fueled by a lust for revenge, Curtis accepts, developing a weapon like no other; a cybernetic suit equipped with new versions of inventions made over his career (such as the neural net) that he names HARDWARE, and immediately tests it by taking out the very bottom rung of Alva's corporations, beginning our story proper.

Time passes, and Hardware's increasingly drastic acts of terrorism and industrial sabotage finally prompt Alva sr. to employ Reprise, a seemingly immortal assassin to take him down. This leads to their first encounter, as Reprise comes to blows with Hardware in a warehouse of black market nanobombs, sacrificing a significant amount of his accumulated 'lives' to unleash one of the bombs at Hardware, dismantling his armour and revealing his true identity. So begins a race between Curtis and his assailant, where he has to rebuild his armour before Reprise can track him or his loved ones down. After getting another mysterious injection of cash at the last minute and a peculiarly stern message of encouragement, Hardware is rebuilt, in a much more sleek and manageable suit (a timely update of the classic design), and goes out to stop Reprise, who was mere seconds away from entering his home and slaughtering Barraki! Another fight follows, ending in Reprise realising he's down to his last life and escaping. A decision that doesn't end too well for him when Mindflow, an assassin in the employ of Lex Luthor, strips his last life away, along with his memories of who Hardware is.

Alongside this arc our B story begins, that of Marisa Rahm, a transgendered liutenant in the Dakota police force, investigating a series of mysterious murders, linked only by the name 'Mindflow', written in blood at one of the crime scenes. When her leads over two months (the same length of time Hardware has been operating, coincidentally enough) only get her as far as finding out that Mindflow is an assassin on some bigwig's payroll, Marisa is pulled from the case by a distinctly hateful and transphobic higher-up. Undeterred, she tries to continue the case under her own steam, ending with her having the misfortune of seeing both Hardware and Reprise's climactic showdown, and the subsequent assassination of Reprise by Mindflow. Tailing Mindflow in the aftermath, Marisa learns that his employer is none other than Lex Luthor, CEO of LexCorp.

Hardware becomes suspicious of his benefactor in the wake of the sudden extra funding and peculiar message left for him in the Reprise story, and for him to use some of the extra money to investigate just who it is that's employing him, and what their motivations are, leading him to suspect Wayne Industries (a lead he dismisses quickly upon meeting the billionaire playboy in charge of the company, who Curtis deems a 'foolish child wasting his father's company in the name of a wild life'), as well as the defunct Kord Enterprises, a company long-dead in the wake of the apparent death of Ted Kord. This is expanded to include LexCorp after Marisa Rahm tries to confront and arrest Hardware, suspecting him of being an accomplice of Mindflow, and subsequently Lex Luthor, a potential employer Curtis hadn't considered.

This in turn would lead to Marisa and Hardware to work together to confront Luthor, only for him to reveal his altogether different motivation of stripping Alva Technologies' secrets from Curtis' brain (Reprise having been killed as another person who may have known something damning towards that company). Before a proper confrontation can happen, Alva Sr.'s monstrous creations The Shadow Travelers break into the tech department of LexCorp, bringing the mega-arc to a head with Hardware and Mindflow attempting to fight them off, whilst Hardware simultaneously tries to stop Mindflow from killing him. Mindflow's dual purpose fails him when the last remaining Shadow Traveler enlarges into a monstrous black shape and slaughters him. Hardware makes a hasty retreat, finding a knocked-out Marisa, taken down by an absent Lex Luthor, and rescues her. The Dakota branch is destroyed by the giant Shadow Traveler, who appears to be obliterated himself in an explosion, and Hardware vows to continue his quest.

The story ends on a sadder note, however, as Curtis returns home to find that Barakki has left him, his angrier ways and constant absence having forced her to give up on him. With this sad note, however, Curtis finds that Marisa Rahm wants to join his crusade against corruption, and will help him solve the mystery of Kord Enterprises.

And that's the mega-arc opening story, as it were. From there there's the possibilities of more encounters with Alva's network or Lex Luthor, as well as approaching the Kord Enterprises issue and whether Ted Kord is alive and funding Hardware. Alongside that there's the bud of Kahndaq, and another possible mega-story of their war with America kicking off, leading to a team-up with multiple heroes, and a one-on-one confrontation with Black Adam.

[Goodness, that was long, wasn't it? I do apologise, seems the whole pitch process brings a talking monster out of me. Anyway, I hope you enjoyed it, I'm genuinely passionate about both Hardware and Marisa Rahm, so it's an absolute treat to have got the chance to sit down and think of what I would actually do given the chance to reboot them and bring an element of the dakotaverse into the DCU proper. And hey, I learnt some lessons about writing pitches, which is always nice. And who knows, maybe one day I'll get to do this... in my dreams]
Written by Maxy Barnard at 6:00 PM