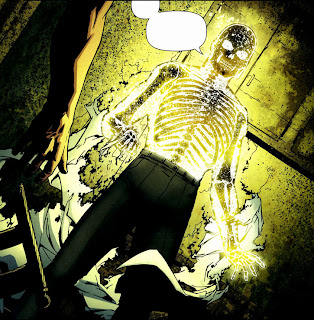 The High Concept
The zaniest villains of the DCU are on a road trip. It’s nasty, perverse, amusing, and the landscape will never be the same. Can one undercover villain finally doing good put a halt to their trail of death and decay?

The creepiest villains of the DCU embark on a cross country trip of debauchery and murder in what they think is a crusade to find Darkseid. The Scarecrow has promised this group a new age of villainy but he’s being led astray by Gorilla Grodd who is taking advantage of Scarecrow’s psychological cracks. As the road trip cuts a swathe of voyeuristic wickedness across the country, one villain works against the group. Doctor Phosphorous has reformed and he’s killing members of the group while reporting to a hero who holds no moral code.

We open on this group of misfits and freaks terrorising a small town bar. If you’ve ever seen Near Dark then you know what we’re looking at here. People die, blood is sprayed, the sunset is ridden into but not by the victorious hero. This is a moment where no hero emerges. We open bleak, we open harsh.

The Scarecrow is calling the shots, he knows which plot tokens need to be assembled across the country, and he’s also already got a young girl he’s keeping in the boot of his car.

The group dynamics should be strange. These people are basically carnival freaks who are suddenly lumped together and driving across the country for some decadent fun (at least in their eyes). The car rides are strange, the pitstops even stranger. There is every possibility for these characters to be sitting outside the world’s largest piano eating burgers and talking about who is a member of the best rogue’s gallery while the ground around them is littered with dead tourists.

Being a road trip also means we can have seasonal heroes step into the tale for just a little bit. The gang can do their best to avoid the Swamp Thing or try to kick Blue Beetle’s ass.

It is early on we see Doctor Phosphorous conversing with someone outside the group in a clandestine manner. It will be slowly revealed that the good Doctor has reformed and is working against the group, from the inside. He’ll eventually start killing the other villains one by one, but does that really make him any better than them? All good heroes have a moral code and the Doctor is so new at this game that he’s still far too harsh.

But who is it he’s talking to? Why, it’s none other than [CLASSIFIED].

This road trip is a glorious exploration of villainy across America. People will line up to join the crew, or be the first in their town decapitated, or try to take these suckers down. Everyone loves a parade but what happens when the whole world becomes Dallas on that fateful November afternoon? The DCnU will never be the same and a new hero will emerge; or will he be taken down after he’s served his purpose?


I'm sure I could also pitch the hell out of a book that actually is part of the DCnU but I really wanted to write this outline. I wish I had another week to really beat it into shape, it just needs a killer B-plot. Oh well, it was certainly fun putting this together.
Written by Ryan K Lindsay at 7:00 PM