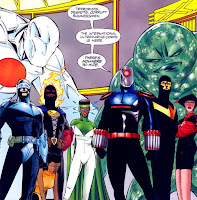 The Concept
They are the American response to the superhuman epidemic.
They are a self-sufficient entity created under the administration of President ___________. Their sole purpose is to hunt down, locate and eliminate superhuman threats without sanction or oversight.
They are the Ultramarine Corps.

Outline
It is one year after the first appearance of Superman. By now various other extra-terrestrial / superhuman beings have outed themselves and co-exist in a world that fears them. General Wade Eiling is conscious of the threat these beings are to the United States – and the world itself. He promptly urges President __________ to fund a ‘super-solider’ program to grant loyal, highly-trained marines similar abilities as these renegade ‘heroes.’ He’s already selected a quartet of candidates; Lieutenant Sawyer, Major Stone, Captain Corbin and Captain Wether. The President signs of on this initiative, thereby agreeing to fund Eiling’s superhuman black-ops squad.

The series begins with the Ultramarine Corps already firmly established within the US Military’s pantheon; America’s first responders to superhuman threats. And they’re damn good at their jobs. These are highly trained marines; prepared for everything and anything. Professionally, from an operations standpoint, it would appear things could not be better for them. They are serving their country with aplomb. Saving American lives.

But not all is right in the camp.

The Ultramarines Corps base of operations is in Smallville, a secluded area the marines have sardonically nicknamed Superbia. When initially developed, it was designed to be the perfect home for the marines’ families. But family life is tough when you’re husband or wife / boyfriend or girlfriend is barely human; is now made up of living water, or able to teleport to alternate dimensions. Every one of the Ultramarine’s family life is fractured; threatening to crumble completely. General Eiling is aware it is their family that allows the Ultramarines to retain some semblance of humanity, and constantly works in the background, bribing and blackmailing the family’s to remain in Superbia.
Meanwhile, the Justice League has now firmly established itself as a global peacekeeping force. The public’s distrust of the colourfully-clad heroes of the DC universe has dissipated; and President _________ is beginning to query the necessity of his super-powered black-ops squad. Eiling is constantly forced to defend the Ultramarine’s viability in a world where Superman publicly stands for truth and justice. He’s done all he can to protect his marines from discovering just how close the plug is to being pulled. But the writing is on the wall: the Ultramarines, as an entity, is months away from being dismantled. Their families no longer want anything to do with them – they want normalcy in their lives. Very soon, the Ultramarines are going to be left with nothing.

So he develops a plan to execute his men, under the pretence he’d rather have their deaths on his conscious than have the Ultramarine’s names tainted when they’re shutdown.

But Eiling’s plan backfires. His operation to execute the Ultramarines fails.
And now they believe the United States has turned on them. After everything they’ve done. Everything they’ve sacrificed.

This is a story about the men and women who have sacrificed their humanity to protect their country. It is about the family of these men and women, forced to live with the inhuman beings their loved ones have become. It is about what happens when these four marines, who’ve given up everything, discover they’re no longer needed; they’re to be discarded; executed. Murdered.

This is the story of what happens when the country’s best turn on their nation; after their nation has turned on them.
Written by Simon McDonald at 1:53 PM