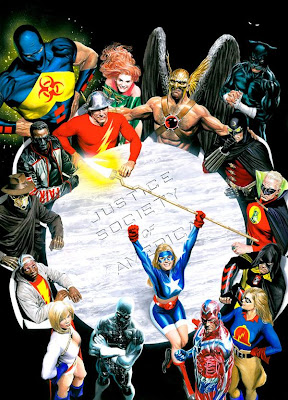 The JUSTICE SOCIETY of AMERICA, originally created by Sheldon Mayer and Gardner Fox in 1940 (Image taken from Vol. 3, launched in 2006).

The Concept: OFFICIALLY, Superman is the worlds first superhero.

OFFICIALLY, NATO did NOT have a top-secret intelligence division known as CHECKMATE, which was NEVER responsible for employing the aid of superhumans in order to help keep the world safe.

OFFICIALLY, the organization known as the JUSTICE SOCIETY was never anything more than a work of fiction created to sell comic books.

In truth, during the Cold War the Justice Society and it’s members were responsible from protecting the world on countless occasions from threats that ranged in origin from supernatural, superhuman, extraterrestrial, and more, all without the world ever knowing what really happened – a truth that is about to become Declassified.

*JAY GARRICK, The Flash. A chemist and physicist from Keystone City. One of the three founding members of the Justice Society.

*ALAN SCOTT, AKA Green Lantern. An engineer from the West Coast. One of the three founding members of the Justice Society.

*CORPORAL TED GRANT, AKA Wildcat. A veteran of World War II turned prize fighter. One of the three founding members of the Justice Society.

*WESLEY DODDS, AKA Sandman. A brilliant PI from New York who’s already a veteran of covert superheroics thanks to his powers. Starting to feel his age. One of four expansion members of the Justice Society after initially aiding them while unaffiliated.

*NUBIA OF THEMYSCIRA, AKA Wonder Woman. Claims to be on a personal mission from ‘Queen Hippolyta’ to stop ‘Mans World’ from destroying the planet with its petty squabbles. No one really believes her story, even if she is an invaluable addition to the team. One of four early expansion members of the Justice Society.

*DINAH DRAKE, AKA Black Canary. Grandmother of Dinah Lance, the second Black Canary who operates in the modern era. A young heroine who is discovered by Checkmate and brought into the Justice Society so she can be trained and kept out of the public eye.

*AUGUSTUS HOMER, AKA The Heroic Hawk-Man. No relation to Carter Hall, the modern Hawkman. Like Dinah, he’s a young, inexperience hero that the Justice Society take under their wing in order to train him and keep him out of the public eye.

The world is entering the 1950s, and the Cold War is kicking into high gear. Chairman Mao has won the Chinese Civil War. Nuclear Weapons have spread beyond US boarders. Rarely has the future been less clear. And these are not the only dangers the world faces, as plenty of Cold War opportunities are waiting to be exploited by supervillains.

Recognizing there are situations beyond their own capabilities, a top secret branch of NATO known as Checkmate recruits a small team of superheros to form a covert Society, one that can help prevent the outbreak of World War III and put a stop to any maniacal madmen looking to use the Cold War to further their own ends.

As the Series opens, it is the last days of 1949, a new decade is just around the corner. Jay Garrick, Alan Scott, and Ted Grant, are already established as heroes. However, they are not widely known to exist by the public and are mostly considered to be urban legends. Wesley Dodds, the Sandman, is also an established hero by this point and has been operating as such since the 1920s, but due to his MO, few have ever even heard of him.

Meanwhile, while NATO and Checkmate have been established, they have yet to fully organize and fill the roles they are intended for. Despite this, Checkmate is successful in using its early intelligence leads to connect a number of dots leading towards an organization known as the League of Assassins and a plot that that threatens the world. This link is only confirmed when the League attempts to wipe out Checkmate before it can make use of this information and anyone who might be aware of the plot.

While Checkmate survives, it is wounded and needs time to get back on its feet. At the same time, it is unable to ignore what it knows. It assigns rookie Agent Sean Thompson to follow leads on supposed individuals with supernatural powers and recruit their help. Using these leads, Sean finds and recruits Garrick, Scott, and Grant to help Checkmate stop the League of Assassins’s plot. With a little unexpected help on the part of Sandman, the three both succeed in stopping the plot and uncovering a group within the League led by Vandal Savage to splinter off.

While successful, the three heroes recognize that the League and Vandal are still at large, and that there are plenty other threats out in the world that they may be needed for. While they aren’t interested in joining Checkmate directly, they do agree to form their own team, the Justice Society, and agree to aid Checkmate in helping to keep the world safe. Checkmate isn’t entirely pleased by this arrangement, but prefer it to not having the Societies aid at all, and assign Agent Thompson as liaison between Checkmate and the Society.

(So that there's no misunderstanding, this is in Grant's place because he contacted me via email asking if I'd like to switch places with him since he felt like he needed a little extra time to get his put together, and I was all to happy to help him out.)