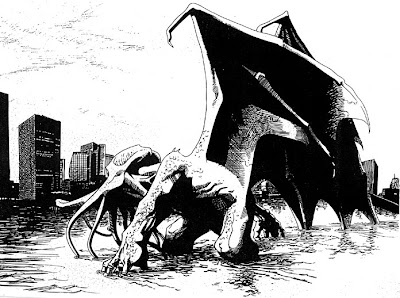 There once was a little-known pulp-writer who went by the title of H.P. Lovecraft. Now Mr. Lovecraft had a penchant for naming the “gods” of his tales with very unusual names. There was Nyarlathotep, Azathoth, Yog-Sothoth, and Shub-Niggurath. However, there was one in particular that transcended the rest to become a staple of pop-culture. This character has seen spin-off stories, films, video games, RPGs, plushies, two albums of carol parodies (I kid you not), a plethora of fan-art, and of course, comics.

Who is this popular fellow? Why Cthulhu of course.

What’s that you say? You’ve been living under a rock for the last 83 years? In that case, I should give you a brief run-down on who he is:

Like all of Lovecraft’s “gods”, Cthulhu is actually an alien. He is green, gelatinous, has bat-like wings, and looks like a fat man with a face full of tentacles. He is also dead, but not really. He’s kind of just been sleeping… for a really long time. To clear things up, here’s a small quote from the Necronomicon:


That is not dead which can eternal lie,
And with strange aeons, even death may die.

Make more sense now? It is also said that ph'nglui mglw'nafh Cthulhu R'lyeh wgah'nagl fhtagn. No, I didn’t just have a stroke, that’s alien-speak for, “In his house at R'lyeh dead Cthulhu waits dreaming.” You should probably be thankful of this, as it has been prophesised that when he awakens--when the stars are right--the whole world will plunge into madness and insanity… sweet, sweet insanity! Mwahahahaha!!!!

Email ThisBlogThis!Share to TwitterShare to FacebookShare to Pinterest
Labels: Cthulhu