Getting to Know Grant McLaughlin

Who is your favourite comic book character? 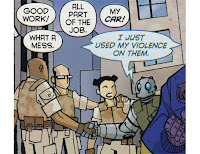 As you may have gathered from my first thought balloons choice, I am a huge fan of Brian Clevinger's Atomic Robo. I am a firm believer of the importance of comics being accessible to and enjoyable for all ages, and this is one of the best examples of that that is currently being published. It also doesn't hurt that it also happens to be one of the best comics being published right now, period. Seriously, if you somehow haven't taken a look at Robo, you owe it to yourself to do so, post-haste.
What is your favourite comic?
Building on my penchant for all-age comic books, it might not surprise you that I fell head over heels for Roger Langridge and Chris Samnee's Thor: The Mighty Avenger.  That this series only lasted for 8 issues (9 with the Free Comic Book Day addendum) is a crime of the highest order, but I will treasure the short time we had.  I wish that more books like this were coming out, and even more than that, I wish they could be financially successful.  Hopefully that day will come sooner rather than later.
Who is your favourite comic writer?

I've already touted both Brian Clevinger and Roger Langridge, and I would certainly rank both of them right at the top of my favourite writers, but to avoid repeating myself, I'll offer Jeff Lemire's name for your consideration.  Although he only came to my attention last year with all the hubub about the re-release of Essex County, he's quickly rocketed towards the top of my favourite writers list, as well.  He has a knack for character driven stories, and he writes dialogue like no one else.  While I've certainly enjoyed him paired with the various artists he's worked with, I must also say that I find his writing to be at its best when it's coupled with his art.  It's unreal.
Who has been the most fun to write so far?
I know it wasn't what Rol was looking for, but my Dracula script (from back when I was a play-at-homer) is perhaps the most fun I've had writing for thought balloons.  To be fair, all the scripts I've had the pleasure of putting together here have been fun for their own reasons, but I was particularly pleased with everything I managed to accomplish in that one page.  I felt that I managed to write two believable characters, living in a unique world and having a funny conversation.  I really need to expand on that idea one of these days...
Which character do you most dread having to write?
My first instinct is to say characters with which I have no experience, as it can be hard to get a handle on how to write them when you don't really know who they are, but upon reflection, I think my answer would actually be characters I really care about.  The more I like them, the harder it is to write, because I find that I want to live up to all the amazing depictions I've seen before, and it can be hard to meet those raised expectations.  Even when you knock out a stellar script, it's easy to imagine how it could have been better.
Which non-comics character would you most like to write? 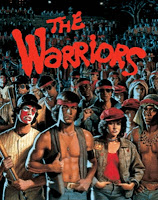 While not a specific character, I would love to write some comics set in the world of The Warriors.  I'll be one of the first to admit that the 1979 film isn't actually that great, but it has so much style and creates such a rich world over the course of its hour and a half run time.  The Rockstar video game that came out years later only added to the franchise's lore and made me more excited for the many story possibilities.
Which script do you think has been your best so far?
I'm going to have to once again return to my play-at-homer days and go with my Lois Lane script, which is actually the first thing I wrote at this site.  I thought for two or three days trying to figure out what situation I could put Lois in, and just when I was on the verge of giving up, the simple "talking on the couch with Clark about paint swatches" idea came to me, nearly fully-formed.  I think it's among the best things I've written here, and I'm especially proud of it because it was the first thing I submitted. 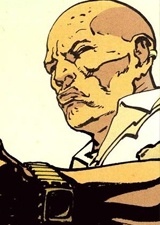 While I'm tooting my own horn, I'll actually throw up a link to something I've written since getting my tenureship.  My Dashiell Bad Horse script is another one I'm rather proud of, particularly because I don't write such serious scenes nearly as often.
Which script do you think has been the best on the site?
Oh, gosh.  I haven't even been here since the beginnings of the site, and even so, I've come across an abundance of amazing scripts.  How could I possibly choose just one?
I've been talking up my own stuff so much, I figure I could at least shine some light on some of my colleagues' earlier works.  So if you'll permit me (and frankly, even if you won't, 'cause I'm writing this post), I'll offer my take on one script that I particularly enjoyed from each of my fellow members.  These are from Lois Lane onwards.
Ben - Kate Kane - This page reads so well.  Kate and Renee's conversation plays out so perfectly.  The whole thing is fun and playful, but still feels really honest.
Danial - Ben Reilly - For someone who hasn't read any Spider-Man, you managed to put together one fine page featuring his cloned doppelganger.  This one is so cute is almost hurts.
Matt - Atomic Robo - I'm slightly biased on this one, but this was my favourite script from Atomic Robo week.  It blew me out of the water with how creative, intelligent, and exciting it was.  Love it to pieces.
Maxy - Stephanie Brown - This is a solid - and hilarious - Batgirl page.  Love the use of Johnny C (rest his comic book soul) and the quick banter.  Reads just like the Stephanie Brown we all know and love.
MK - J. Jonah Jameson - This page makes me laugh every time.  I know it's a J. Jonah page, but I love the way you write Spider-Man.  That last line is solid gold.
Rol - Dashiell Bad Horse - Perfectly conceived concept that was executed even better.  Bonus points for the incredibly dark humour.  More bonus points for coming up with the various screams of that poor sob.
Ryan - Dashiell Bad Horse - This one still sticks with me.  The idea took me completely by surprise and hit me like a ton of bricks.  I wish every page of every comic could feel so poignant (well, that might be a little exhausting, but still...).  The title is perfect, too.
Sime - The Riddler - Oh man, this one gives me shivers.  Great take on the Riddler - and an even better take on the Joker.  I don't envy Edward's plight, but I envy you for having written it.
Of course, these are only some of the many scripts I've had the pleasure of going through since discovering this site, and I can't wait to see the many, many more that are yet to be written.
If you've made it this far, you have my thanks for taking the time to read some of my somewhat self-indulgent thoughts.  I hope they've been somewhat enlightening for you.
Written by Grant McLaughlin at 11:59 AM

Email ThisBlogThis!Share to TwitterShare to FacebookShare to Pinterest
Labels: Getting To Know Thoughtballoons, Grant McLaughlin