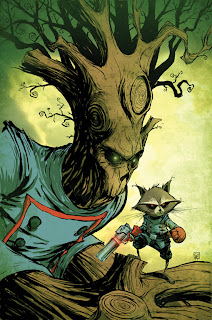 Come on, this one should have been half-obvious from the moment I said that Rocket Raccoon is my favorite comic book character. You can read up on him there if you want to basics on why he’s showing up this week. Groot, however, might not be as obvious, especially since it means that my favorite character has to share the spotlight.

But you know what? I don’t think Rocket would have it any other way.
There are some things that, while all well and good on their own, can be paired up with something else so that both become something much, much more than the sum of their parts. Like Peanut Butter and Chocolate. The exact same principal applies to Comic Book characters, sometimes in ways you might never expect. Who would have thought, when they were originally created, that Power Man and Iron Fist or Blue Beetle and Booster Gold would one day be teamed-up and become the iconic parings that they remain to this day?
Such is the case with Rocket Raccoon and Groot. And it’s amazing to think of how great a pair they’ve made in spite of how it was less than five years ago that someone got the bright idea that putting a wise-cracking raccoon and
a walking talking tree together might be a smart idea. But that’s just what happened when Keith Giffen first stuck them together for his Annihilation: Conquest – Star-Lord miniseries. And of course, I’d hate to diminish the contributions of DnA in the matter, who managed to take the concept and run with it in a way that’s allowed the Raccoon and his Tree to get their own miniseries post-Guardians of the Galaxy. One which manages to far outshine the main book they’re supposed to be a ‘backup’ story to, I might add.
I have little doubt that Rocket Raccoon and Groot still have a bright future ahead of them, and I look forward to seeing just what scripts both our regular and guest writers come up with this week that I have no doubt will provide further evidence to this effect. 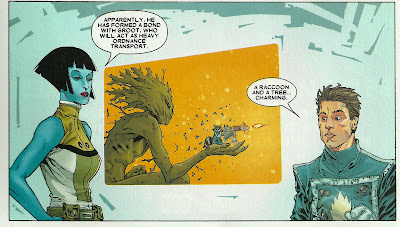 Email ThisBlogThis!Share to TwitterShare to FacebookShare to Pinterest
Labels: Rocket Raccoon and Groot, Why?