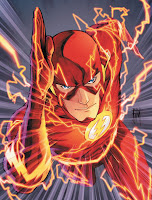 If you ask a non-comic-reader who their favourite DC character is, they will undoubtedly say either Batman or Superman. This is fair enough, as both these characters have had more films, TV shows, cartoons, and video games than any other. Myself, on the other hand--having never read a DC comic until the recent New 52 campaign--had always considered The Flash to be my favourite. Why this is, I've never been entirely sure. My best guess is the short-lived live-action TV series that ran when I was at the impressionable age of 11. No matter the source, my liking for the character has carried through to adulthood and has been more than justified by Francis Manapul and Brian Buccellato's current series.

Email ThisBlogThis!Share to TwitterShare to FacebookShare to Pinterest
Labels: The Flash