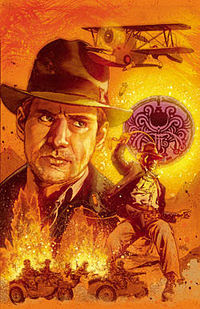 Raiders Of The Lost Ark is easily a contender for my favourite film of all time (I'm not alone in that regard) and a huge influence on me as a writer. The movie is a perfect blend of character, romance, thrills and action and includes some of the best set-pieces put to celluloid. Not only that but Indy inhabits a world rich with mythology, history, great villains and has a supporting cast to die for. 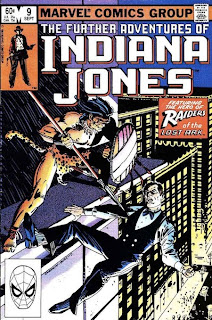 Indy is a guy just trying to make his way in the world. He's a little cynical, sometimes romantic and has fears and insecurities like the rest of us. He knows how to handle himself in a fight, but he's not invincible. He messes up, he dusts himself off and tries again. He's making it up as he goes along.

As Spielberg put it:

"Indiana Jones is not a perfect hero, and his imperfections, I think, make the audience feel that, with a little more exercise and a little more courage, they could be just like him."

However, for a character so beloved and with such a deep well to draw from Indy has had a pretty raw deal when it comes to comics. The Marvel series introduced a few years after the first movie featured the work of such industry stalwarts as Denny O'Neil, John Byrne, David Micheline, Howard Chaykin, Archie Goodwin, David Mazzuchelli and even the legendary Steve Ditko. The series ran for 34 issues and featured some great stories and art. 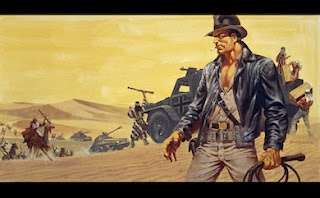 But Indy didn't receive another outing in comics until the 90's when Dark Horse picked up the license with an adaptation of the PC game Indiana Jones And The Fate Of Atlantis. The adaptation isn't something to write home about and the art is serviceable if not great. Dark Horse would continue to publish Indy's adventures throughout the 90's. The scripts are, at best, solid and the quality of the art is mixed. Recently, in 2008, Rob Williams tried his hand with the character in the four issue mini Indiana Jones And The Tomb Of The Gods, but since then it's been quiet.

This is where you come in.

With Indy himself and a huge swathe of history, locations and situations to choose from I'm excited to see what the tenured writers and those of you playing at home come up with.
Written by Dan Hill at 12:00 AM

Email ThisBlogThis!Share to TwitterShare to FacebookShare to Pinterest
Labels: Indiana Jones, Why