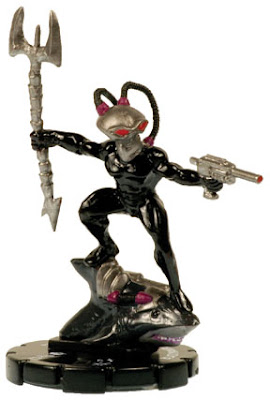 You see that image to the right? Yeah, that one. The one with Black Manta surfing on the head of a shark that’s got a frikken LAZER BEAM attached to its head.
THAT’s why Black Manta.
Background information, for the uninformed. That image is of a miniature from a game called Heroclix. It’s a collectable miniatures game that’s largely focused on Superheroes (but Halo and Street Fighter and Lord of the Rings have made appearances as well) in which you put together teams of figures and have them fight other teams. That Black Manta piece is an actual, real figure in the game. And it’s sculpt is pretty much the most awesome sculpt in the whole game, if you ask me. I have one, and I keep it on my desk.
But here’s the problem - while Heroclix Black Manta gets to do stuff like surf around on sharks being a bad***, comics Black Manta…not so much. Sure, the adaptations have done a good job of making him a credible villain, like in Batman: The Brave and the Bold and the Justice League cartoon (even if it technically wasn’t Black Manta), but it hasn’t done a whole lot to improve his standing in the comics. All he’s really know for is ‘that guy who fights Aquaman’. That, and maybe that he’s the new Aqualad’s dad.
But as far as villains go, that’s a pretty pathetic track record. Hardly anything like what you’d expect from a character who gets a miniature where he’s riding around on top of a shark (which has a frikken LAZER BEAM attached to it’s head!)
Which is why I picked Black Manta. Because I want to see some scripts worthy of a man who can surf on the head of a shark.
Make it happen, people!
Written by MK Stangeland Jr. at 12:00 PM

Email ThisBlogThis!Share to TwitterShare to FacebookShare to Pinterest
Labels: Black Manta, Why?