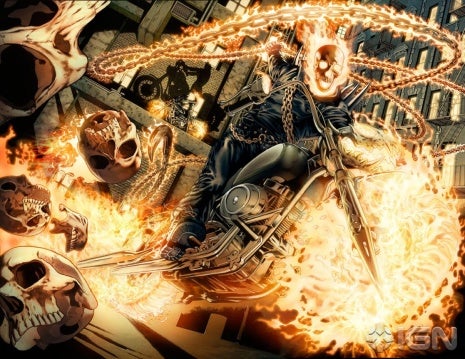 Ghost Rider is one of the most visually interesting characters on the marvel rooster, from his flaming skull to the leather jacket and huge motorbike. He is pulp at its best, and yet he is always over looked.

His comic series have had ups and downs and even with this week’s release of the Ghost Riders second go at making it on the big screen. I sadly see little hope for our flaming hero having the same silver screen success as those other guys, Tony Stark, Steve Rogers and Peter Parker, you may have heard of them. This is a crying shame. So much potential lies in this material.

So it falls to us, the writers of Thought-balloons to show the world why Ghost Rider deserves their attention as much as those other heroes. Are you up to the challenge?

What with the him being the earthly embodiment of hellfire and vengeance, plus a motorcycle riding stuntman to boot it shouldn’t be to hard to showcase how awesome Johnny Blaze is.

So mount up and ride out.

It’s time to burn some rubber and set the world ablaze.