I love The Warriors.  It's rather far from what one might call a perfect film, but it's always been one of my favourites.

I've always thought of it as an exemplary lesson in world building.  The opening scene of the movie tells the audience everything they need to know about the world that the Warriors live in.  The lingo.  The clothing.  The rituals and mannerisms.  It's all there, and it's all I want.

From the boppers to the soldiers to their rumbles for their turf, this movie literally oozes style from start to finish.  Every single character you see is another chance to learn just a little more about the strange world these gangs all inhabit.  The whole thing might skimp a little bit when it comes to substance, but's that's a sacrifice that I'm more than willing to make.

I've always wanted to spend more time in their world.  The Rockstar game back in 2005 was a welcome opportunity.  As was the Dable Brothers' comic book adaptation (although I only ever found one issue of it).  But now we have our own chance to revisit these faces, both old and new. 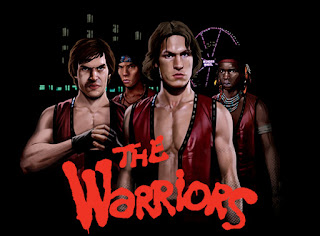 So what do you say, suckas?

Can you dig it?
Written by Grant McLaughlin at 12:00 PM

Email ThisBlogThis!Share to TwitterShare to FacebookShare to Pinterest
Labels: The Warriors, Why