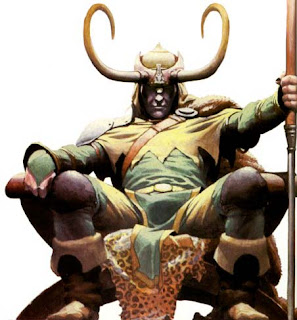 Is Loki ‘massive?’ Actually, probably not, but he certainly opens the flood gates for massive. Loki is a schemer, a talker, a conniver. Loki is the guy who unwittingly brings in the massive. Or makes you think it was unwitting when in fact he planned it all along.

That’s another reason why. To write Loki, you have to become a planner. You have to be ten steps ahead. If you’re good, you’ll be ten issues ahead. I respect a character where he forces the creator to lift their game in order to keep up. You can’t be lazy with Loki.

Ultimately, we want Loki because he’s fun to write. He’s fun to plot. He’s just fun to have around. 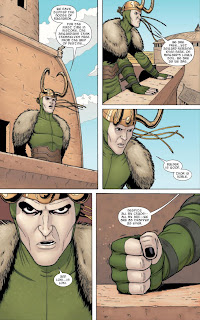 And possibly most importantly, he’s a big reason for bringing us the Avengers. He was the initial villain in the debut issue and now he’s the reason for the season this year as The Avengers hits screens everywhere and drops a superhero team movie to end them all. The comic reading teen inside me still hasn’t shut up about it. And I hope he never will.

This is the second week of our amazing AvengersThon on the site here. We started last week with Nick Fury, and now we're only Loki. I wonder who will come in the next few weeks...

This is also our second week in a four week venture to find the next two thoughtballoons Tenured Writers!

Write your LOKI scripts in the comments below and enter the fray.
Written by Ryan K Lindsay at 12:00 PM

Email ThisBlogThis!Share to TwitterShare to FacebookShare to Pinterest
Labels: Loki, Why