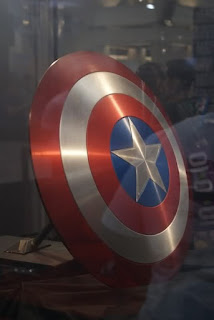 We've already covered the man himself here at Thought Balloons, but the fact remains that Captain America's shield is an integral part of who he is.

Superheroes are iconic.  And I don't know if there's any more recognizable part of comic book lore than Cap's trusty vibranium buckler.  Some might argue that Batman's batarangs could fit the bill, but while those little guys are easily identifiable, they aren't nearly as unique or central to the Dark Knight as the shield is to America's premier Super Soldier.  That thing has been on Cap's arm or back pretty much since he first burst onto the comic book scene, and it certainly won't be leaving any time soon.

Every character who has filled-in for Steve Rogers has used the shield.  It's as much a part of who Captain America is as the man who wields it.

Every single adventure that he's gone on, the shield has been along for the ride.  I imagine that that would add up to a good number of untold stories.

I think it's time we tell some of them.

I'd also like to point out that I'm pretty sure that there aren't any other comic book accessories currently hanging on Stephen Colbert's wall, which I think we all know counts for a lot.