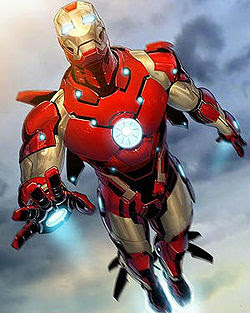 Iron Man has already been looked at here on Thoughtballoons, but it is not the man who makes the hero but the iron.

It's not Tony Stark flying through the skies or taking down supervillains, it’s the armour he wears. It's the armour that turns him from a mad scientist into a superhero, it’s the armour that lets him fly and take a punch to the face from the Hulk. This suit makes the man a hero. So lets all give the tech its dues and show off just how great it can make a man.

Besides I mean any suit that can get you a job on a superhero team made up of a Super Soldier, a Hulk and a God is one hell of a thing.