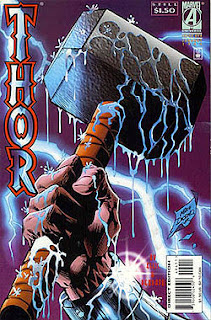 Bond has his Walther PPK, Doctor Who has his Sonic Screwdriver, Cap has his shield and Thor has Mjolnir. Forged of Uru by Dwarven blacksmiths this hammer has become synonymous with the Son of Asgard.
But perhaps the closest analogy to draw here is Arthur’s Excalibur, especially when considering the inscription on Mjolnir:

"Whosoever holds this hammer, if he be worthy, shall possess the power of Thor."

Many have wielded Mjolnir from Beta Ray Bill to Superman himself but in the end it always returns to its rightful owner. In the comics Thor’s lifeforce is bonded to the hammer, increasing this connection further. But the most important thing to bear in mind about Mjolnir is what it tells us about Thor’s character.

In the recent movie, Thor has been unable to wield the hammer since being banished to Earth. It's only when he learns to be humble, when he's ready to sacrifice himself to save those around him that he's able to lift the hammer once more.

Worthiness here has nothing to do with strength. Mjolnir then is not only a badass hammer but a constant reminder to Thor to keep his ego in check.

With that in mind, there’s plenty of scope here for some great scripts and scenarios.

*I feel I deserve some kind of recognition for avoiding all MC Hammer jokes whilst writing this post. 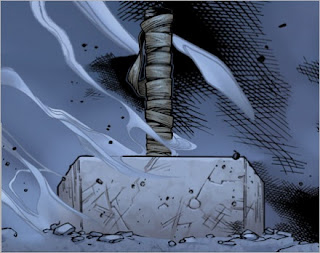 Email ThisBlogThis!Share to TwitterShare to FacebookShare to Pinterest
Labels: Dan Hill, Mjolnir, Why?