I'm not referring to the tagline of the Matthew Broderick starring stinker, but the the character of Godzilla himself. Most people when they think of Godzilla think of the goofy suit and crazy monsters battling it out, destroying Tokyo in their wake. The original film picked up the baton wielded by early American films like King Kong and Mighty Joe Young. But, like it's American counterparts, if you scratch the surface you begin to find real world issues at the centre of the narrative. The original, underrated, Godzilla (1954) opens with the fishing boat The Bingo Maru being attacked by Godzilla, the fishermen aboard receiving radiation burns as a result. This sequence has its roots in the real life fishing vessel Lucky Dragon 5 whose crew were exposed to radioactive fallout in the wake of U.S atomic testing at Bikini Atoll in March 1954. The entire film is a slow burn full with tension and noir-esque cinematography.

Here Godzilla is the collective fear of the burgeoning nuclear age made flesh, with hints that nuclear testing has either woken or created our scaly friend.  The film deals strongly with the idea of science out of control,  the notion that if we let ourselves, we will be the parents of our own destruction. The films finale features Godzilla running amok through Tokyo in a facsimile of a rolling nuclear attack (director Ishiro Honda had seen the damage in Nagasaki and Hiroshima firsthand). The films closing moments also feature the main character taking his potentially destructive technology to the grave after he has used it to defeat Godzilla, lest it fall into the wrong hands (he falls short of saying "Now we are all sons of bitches"). It was only with the sequel Godzilla Raids Again in 1955, and the arrival of Anguirus,  that the films began to settle into the routine of pitting monster vs monster (King Kong Vs Godzilla, Mothra Vs Godzilla, Ghidorah the Three Headed Monster). 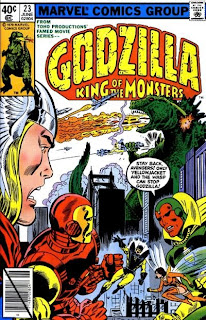 Godzilla made his way into comics right from his birth in 1954. Indeed, every single film from the original up to Godzilla 2000 has been adapted into comic book form. From 1977-79 Godzilla also made his appearance in Marvel comics, written by Doug Moench and drawn by Herb Trimpe, facing everyone from The Avengers to Devil Dinosaur. A few of these comics also took a leaf from the later films, depicting Godzilla as a lesser of two evils, an antihero of sorts who would stop a more savage creature in his wake-- thus saving mankind.

Through the late 80's and 90's Dark Horse picked up the license for the character publishing him in a number of stories and even sending him hurtling back through time. Recently, IDW have acquired the license publishing a number of mini-series that range in genre and scope with Godzilla: Gangsters and Goliath's straddling both the monster and crime genres, and Duane Swiercyzinski's recent #1 pitting a Statham-esque special forces guy against Godzilla.

So, Godzilla then-- a metaphor for the dangers of science gone wrong,  antihero, destroyer, saviour. The scope is there for them all.*

*Or you could just smash things.
Written by Dan Hill at 12:00 PM

Email ThisBlogThis!Share to TwitterShare to FacebookShare to Pinterest
Labels: Dan Hill, Godzilla, Why?