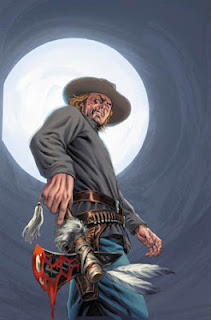 
Jonah Hex has a complicated history. Born in the Old West, Jonah's mother ran off when he was just a young 'un, leaving him in the "care" of his abusive, alcoholic father. His father would go on to sell Jonah to a tribe of Apache for a small price. Originally treated as a mere slave, Hex would eventually win the favour of the tribe by saving the life of their chief. But it didn't last. Hex was framed by a jealous rival and cast out. In his youthful anger, he joined up with the Confederacy during the Civil War, a decision that would eventually weigh heavily on his shoulders, thus the reason he wears his grey uniform at all times -- a badge of guilt. With a gruesomely scarred face and a talent only for killing, Hex became a bounty hunter after the war.


Then there was a brief period where Hex was sent to a post-apocalyptic future. He's also faced some supernatural enemies in his time, and teamed up with Amadeus Arkham to catch a serial killer, but it's the grizzly western genre that suits the man best; like a snake in the desert.


But it is not this past, intricate though it may be, that makes Hex such a compelling character. Nobody can quite say what it is. Maybe it's the fact he so rarely speaks of said past, or indeed, anything, unlike most characters who exposit all over the place. Maybe it's the fact that despite being a cold-blooded killer, he maintains a strict, personal code of honour. Maybe it's because he's a bastard's bastard who purposefully goes out of his way to minimise his involvement with people, yet occasionally gives us glimpses of a better man underneath with acts of humble kindness. Maybe it's because he once tackled a horse. 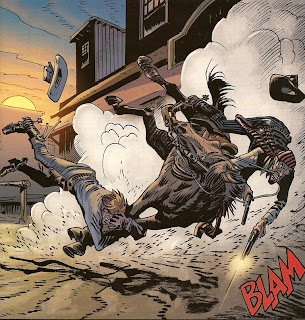 Who knows? I remain forever in awe of the man that is Jonah Woodson Hex, and I hope he never changes for the better.

P.S.: Hex's co-creator, the great artist Tony DeZuniga, passed away last month, and while I was always going to pick Hex, this could also serve as a late tribute.

P.P.S.: Anyone who invokes the terrible, terrible movie will be invited to throw down hot lead at high noon.
Written by J.D. Coughlan at 12:00 PM