(Like all of us, I'm sure, we all have a few "dream projects".  One of mine is to do a Vertigo reboot of The Demon, set in New Orleans.  The central plot of the series would revolve around the return of Morgainne de la Fey, which would be heralded by three "harbinger-bearers":  Klarion the Witch-Boy, the illegitimate son of Vlad Tepes, and this character...

Rouleaux is a vodun Bokor.  If you need a parallel, in voodoo, a "houngan" would be like a priest; a "bokor" would be a sorceror.  He can access the "loa" or spirits of both good and evil, "serve with both hands" as they say, and are rumoured to be born into great "ashe", or power...)

Setting:  Interior, an abandoned plantation house - main salon.  Everything should look delapidated or rotten, except for a clean cube of butcher's-block (this is Rouleaux's altar) with meter-square sides.  At the foot of the altar are piles of skulls, mostly human but some are animal as well.  They are covered in, and coloured by, years' worth of candle wax.  There are presently about a dozen candles burning on the skulls now.  On the altar should be the following:  A bottle of amber rum, a small mound of fresh cigars, a straight razor with a dirty blade, and an old, small portable radio with a cassette player (artist should somehow indicate that drum music is playing from it).  Three young and buxom red-haired women in loose white robes lie semi-conscious on the floor.

Panel 1 - We are looking from over ETRIGAN's shoulder, seeing what he sees:  Levitating one or two feet above the hardwood floor is a large boa constrictor, looped in a loose knot.  Levitating about six inches above the snake is the Bokor ROULEAUX, sitting cross-legged.  He is a large African, dressed like Baron Samedi, but bare-chested: 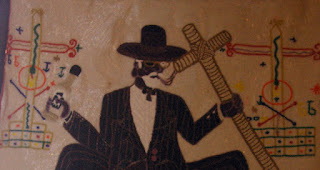 and his bare feet are cut and bleeding.  He is holding a bottle of dark rum in one hand, the neck broken jaggedly.  His other hand, his index and middle fingers had been dipped in the rum and is writing magick script, hanging in the air, with the dark liquid.

ROULEAUX:  The loa have revealed your true ancestry, daemon.

ROULEAUX:  Etrigan.  Son of Belial.  Spawn of Lilith, the raan-va-dhath of the Pit.  Second generation of Ashteroth the Daemonfather himself.

ROULEAUX:  I have your line, hellspawn!


Panel 2 - The yellow, claw-like hand of ETRIGAN, yanks the rum from ROULEAUX's hand by the broken neck.  ROULEAUX is surprised, ETRIGAN is smirking.

ETRIGAN:  If I was devil, a deal could be negotiated
But a demon, such as I, is privately motivated...

Panel 3 - ETRIGAN draws a wide rum ring in front of him in the air from the bottle, facing ROULEAUX.

ETRIGAN:  And it seems we have the pleasures of meeting before us
The Baron himself, far from the deadlands mortals fear.


Panel 4 - ETRIGAN blows a tight jet of hellfire from his pursed lips, setting the floating rum circle to swirl aflame.  His hand gestures to the redheads on the floor.

ETRIGAN:  With three fleshy treasures, here - forgive us this chorus...

Panel 5 - The burning circle has now become an orange glowing sigil: the vede of the death loa Maman Brigitte: ETRIGAN:  Tell me, does your lovely wife, the Maman Brigitte, know you're here?

Panel 6 - We see ROULEAUX's face contort in fear as he tries to turn away from ETRIGAN and the sigil, which has two chalky arms with bony hands and long nails reaching through the spaces in the sigil (we don't know if he's afraid of what comes from the sigil, or the Demon behind it).  ETRIGAN's arms are thrown wide, his head is thrown back as he laughs...