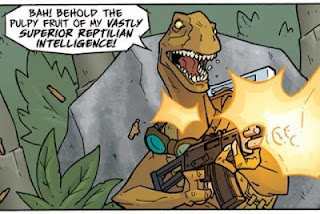 Because I’m probably a bit of a Dr. Dinosaur fanboy.

The fact that I currently don’t own a Dr. Dinosaur action figure is largely on account of how they currently don’t make them and sell them in stores (yet???). So if it sounds like I’m gushing a little, now you know why.

You now how they say that great antagonists make for great protagonists? Or that a hero is only as good as the villains they have to fight? That kind of thing? Considering how great a character Brian Clevinger and Scott Wegener’s Atomic Robo is already, it would take a pretty fantastic villain to really stand out.

That’s exactly what Dr. Dinosaur is – a dang fantastic villain. He’s arguably a classic silver-age style bad guy written in a way that fits with a modern age sensibility. He’s a frikken talking velociraptor, for one (Hollywood version, but that’s neither here nor there). Then pile on top of that his crazy mad evil genius scientist credentials, his claims of being a time traveler, and the fact that he proves to be a genuine threat to Atomic Robo, and you have yourself a bad guy the likes of which you won’t find anywhere else.

Oh, and in case I forget, more often than not everything he says or does is downright hilarious. He’s legitimately dangerous, certainly, it’s just that he happens to be laugh out loud funny while doing it.

But don’t take my word for it – Dr. Dinosaur’s shown up in just about as many free comics as he has regular Atomic Robo volumes. Most of them are currently online, too, including his debut in “Why Atomic Robo Hates Dr. Dinosuar” and the Atomic Robo FCBD 2011 issue.

There’s also the 2012 FCBD issue, though that one currently isn’t online. A shame, since it’s also probably one of my favorite single comic issues in years. Given that it was free, I think it’s a pretty strong statement about how much care Brian Clevinger, Scott Wegener, and the rest of the Atomic Robo team put into each and every issue.

Email ThisBlogThis!Share to TwitterShare to FacebookShare to Pinterest
Labels: Dr. Dinosaur, Why?