Why (the Hell) Etrigan?


I happen to be a HUGE fan of Jack Kirby (who ISN'T a fan of the King?), but specifically, I think his true genius was in the work he did for DC in the 1970's.  Not only did he give us Darkseid and the NEW GODS saga, he told dystopian parallel tales in both O.M.A.C. and KAMANDI...and then he gave us a little taste of Hell...

Etrigan is the son of Belial, and thus a demon prince.  To forstall the fall of Camelot, Merlin (Etrigan's half-brother!) bound him to a "cage of meat", Jason Blood.  With the Demon inside of him, Blood is effectively immortal, and uses Etrigan's knowledge to his benefit as an occult archaeologist, and usually working on the side of angels, keeping evil effectively in check.  As Merlin's sibling, Etrigan has knowledge of magic; when pushed, he can breathe dragon-like jets of hellfire on his foes.  And in all of humanity, he hates his "cage" the most, and likes to psychologically keep him off-kilter.

What makes Etrigan a challenge to write is that when Etrigan was "promoted" in the infernal heirarchy, he became a "rhymer".  The more complicated the rhyming, it is assumed, the greater the influence a demon has in the underworld.  When your poets consist of the likes of Alan Moore, Neil Gaiman, Matt Wagner, Garth Ennis, et al, we can assume his ranking is high indeed.

Even when Blood lets the Demon take over, it's in verse:
Yarva Demonicus Etrigan.
Change, change the form of man.
Free the prince forever damned.
Free the might from fleshy mire.
Boil the blood in heart of fire.
Gone, gone the form of man,
Arise the demon - Etrigan!
(usually only the last two lines are necessary for the change) 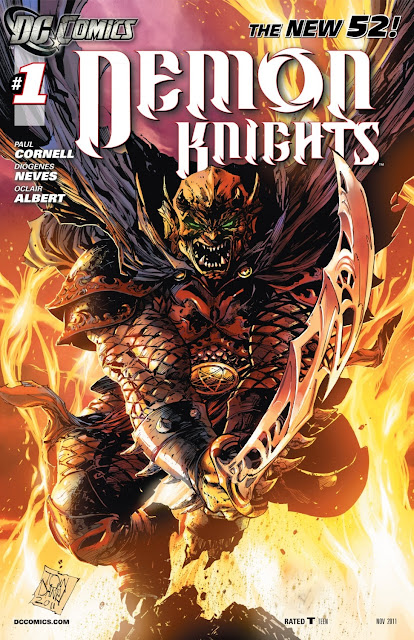 Today, Paul Cornell chronicles the adventures of Etrigan in the excellent Demon Knights of the New 52, taking the character back to his Camelot roots, but he also has been known to pal around with Batman, Swamp Thing, Lobo...or whoever he feels like giving hell...

So, my scriveners, weave your pages
In verse and poems or popular tunes
As Etrigan fights evil with evil through the ages
And within our humble Thought-Balloons.

Email ThisBlogThis!Share to TwitterShare to FacebookShare to Pinterest
Labels: Etrigan, R.A. Wonsowski, Why?