Because sometimes you want to walk on the dark side of things.

“Murder book” is a term used by detectives to refer to a case file on a homicide investigation. Murder books typically include crime scene photographs and sketches, autopsy and forensic reports, transcripts of investigator’s notes and witness interviews. They chronicle the life of a case from the time the murder is reported until an arrest is made.


Ed Brisson writes a mean crime story, and he's got a number of crime mini-anthologies to prove it.  While they're named after the detective's tool, his tales are more often than not focused on the other side of the law.  Criminals big and small populate his comics, living out different scenarios of depravity and illicit activities.

If you're looking for some awful intense stories of degeneracy,  crime, and yes, murder, then Murder Book is the comic for you.  There's little uniting these stories beyond their general subject matter and the quality writing and art that goes into each and every one, but that's a big part of the fun.

I'll read pretty much anything as long as it's good (which Murder Book definitely is), but the stories Brisson and company tell are outside of my usual type of writing.  Fortunately, part of what we try to do here at Thought Balloons is to challenge ourselves, so I'm picking something that's outside of my comfort zone.

Did I succeed?  You'll have to tell me.

It's also a nice bit of symmetry after last week's pick, because while most of the stories were self-published, Murder Book also appeared as a backup feature in Near Death #8 through #11.

As always, if you're wanting to throw your hat into the ring this week, you're more than welcome to do so.  If you'd like to play-at-home, feel free to leave your page in the comments here.

And should you be unfamiliar with these brilliant stories, Brisson has kindly put up plenty of his work at the Murder Book website here. 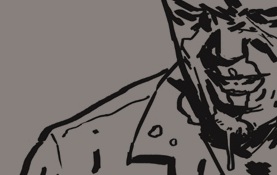 Email ThisBlogThis!Share to TwitterShare to FacebookShare to Pinterest
Labels: Murder Book, Why