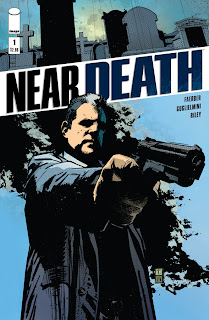 Can a person truly change? Does everyone deserve a second chance?

These are the two questions Jay Faerber and Simone Guglielmini's Near Death ask the reader.

The premise of the book is simple:

Markham, a killer for hire, is badly wounded during an assignment. During this ordeal he has a near death experience and glimpses hell, seeing what's waiting for him there. As a result, he turns over a new leaf and pledges to save a life for every one he's ever taken.


The majority of the issues are done in one stories, elegantly told by Faerber, Guglielmini and Riley. This gives the comic an episodic feel and also means anyone can jump on board with any issue.

During the second issue Markham is presented with a moral quandary. A man tasks Markham with protecting him from two assailants. Markham later learns this man is a convicted sex offender. Shortly after, Markham has a conversation with his friend, Sutton, seeking her advice. It's only a short two page scene but serves as an excellent insight into the reasons behind Markham's new outlook.

This isn't some mission of virtue for him. It's selfishness, pure and simple. He's doing it because he doesn't want to see 'that place' again. As the issue unravels it's fascinating to watch Markham struggle with his newfound code to not kill people but still deliver something approaching justice.

As the series progresses (taking in a three parter which ties up some of the events from the previous issues) we begin to see a different side to Markham. He begins to acknowledge that, yes, he might just be seeking some kind of forgiveness, some kind of redemption for his former life. But he knows it's a long road, one he may not see the end of.

My own experience of  Near Death began with the first trade and I was hooked straight away. Not since Scalped, have I promptly added a title to my monthly order.

In the single issues we get excellent short essays by Faerber talking about his favourite examples of crime literature, movies and TV. More recently these have been joined by a fantastic backup in the form of Ed Brisson's Murder Book strips.

Unfortunately, the combination of excellent stories and value for money couldn't lift the sales of the book and it's currently on hiatus as Faerber and co work out their next move.

So, like Markham's initial motivations, this weeks pick is a little bit of a selfish move. I want the tenured writers and the play at homes to dig their hooks into a cool character, one I deserve feels more traction and visibility. I'd like visitors to the blog to have their interest piqued enough to check out the first issue (super cheap on Comixology) or trade.

Email ThisBlogThis!Share to TwitterShare to FacebookShare to Pinterest
Labels: Dan Hill, Near Death, Why?